Troopers in Army ATVs AM-1 with Flagpoles 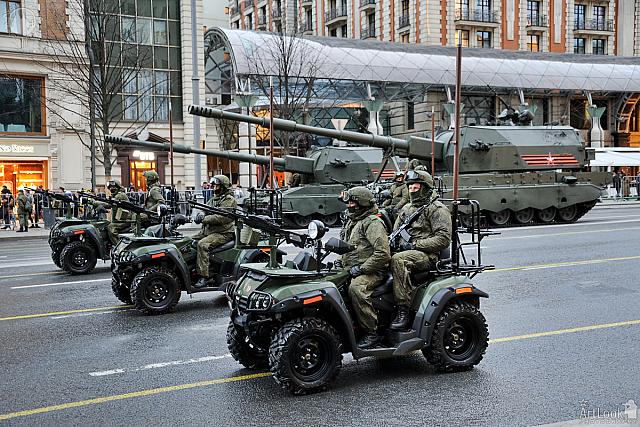 «Troopers in Army ATVs AM-1 with Flagpoles»

Russian servicemen in army AM-1 all-terrain vehicles (ATVs) at the beginning of Tverskaya Street before the first night rehearsal of the 2018 Victory Day parade on Red Square devoted to 73rd anniversary from the Great Victory of USSR over Nazi Germany. Behind it are two 152mm Self-Propelled Howitzers "Koalitsiya-SV" (Coalition-SV).

The AM-1 army all-terrain vehicle (ATV) is designed for conducting sentinel and reconnaissance operations, raiding and search and rescue operations conducted in different climatic conditions. The army ATVs provide the maneuverability of the fire support group, the flexibility of conducting fire and also for performing a number of operations in the course of which it is inappropriate to use heavy armored vehicles. At present days, the AM-1 army all-terrain vehicle is in service with the Russian army. It is already used in the airborne forces and the Arctic brigades being created in the country, and AM-1 ATVs are also being used by the army special forces.

The AM-1 quadricycle was developed on the "Russian Mechanics" on the basis of the serial civil model RM 500-2 4x4. The army quadricycles have additional specific characteristics: reinforced suspension, protection from infrared radiation, mountings for grenade launchers and automatic machines, the temperature range of starting the engine - from minus 20 to plus 50 degrees Centigrade. These ATVs can also be used in the Arctic regions.

At the Carpenter Tower of the Holy Trinity - St. Sergius Lavra

View of the architectural ensemble of the Holy Trinity St. Sergius Lavra from a corner of Carpenter Tower. The mighty monastery fortifications were built in stone in 1550s on money commissioned from Ivan the Terrible to replace the wooden ones for better protection of the top rank cloister.