Troopers in the Arctic Version of the BTR-82A 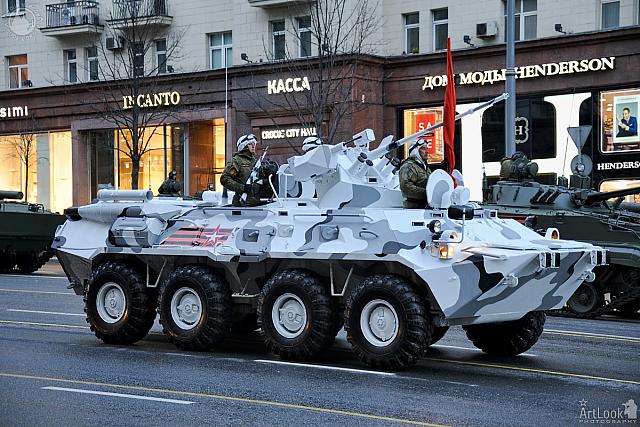 «Troopers in the Arctic Version of the BTR-82A»

Russian troopers in the arctic version of the BTR-82A with a 30-mm cannon 2A72 on Tverskaya street before the beginning of the first night rehearsal of the parade on Red Square dedicated to the Victory Day. It is the modernized version of the BTR-82A armored personnel carrier (APC) for harsh Arctic climate that capable of operating at a temperature of minus 60 degrees Celsius (-76°F). The wheeled APC can equally well overcome marshland, coastline and snow 60 cm thick. The crew and landing party consist of three and seven soldiers, respectively.

The Local Tier of iconostasis of St. Basil the Blessed Chapel

The most prominent feature of an Orthodox church is the Iconostasis, consisting of one or more rows of Icons and broken by a set of the Holy Doors (also called Royal Doors or Beautiful Doors) in the and a door at each side (the Deacon's Doors). In ancient times, the Iconostasis was probably a screen placed at the extreme Eastern end of the church (a tradition still preserved by Russian Old-Believers), but quite early it was moved out from the wall as a sort of barrier between the Nave and the Altar, with the opening and closing of curtains making the Altar both visible and inaccessible.