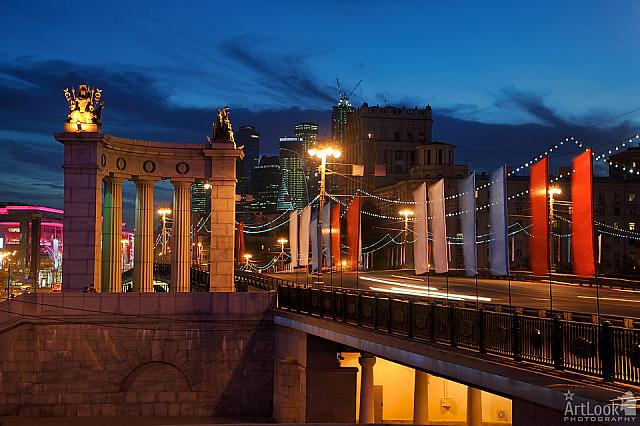 Moscow city is beautiful at night, especially on red-letter days, when bridges, streets and squares of the city are festively decorated with flags, banners and garlands. This is a view from Rostovskaya embankment on Roman Portico and 1952 arch above the embankment of Borodinsky (Borodino’s) Bridge in twilight. The bridge is decorated with holiday lights and banners using the colors of the Russian National Flag - white, blue, and red. The monumental Stalin apartment building on Tarasa Shevchenko embankment is standing in background at the right of the picture and far away – modern skyscrapers of new Financial district of Moscow city in the middle.

The old and famous bridge in western part of Moscow city was reconstructed several times and named Borodinsky to commemorate the Battle of Borodino. On this site from western part of the city, during the 1812 Patriotic War with France the old wooden bridge was in the way of retreating Russians and Napoleon's troops invading Moscow.

Colorful Fountains and Church of St. George in Twilight

Nice colorful fountains with the church of St. George in the background at Square of Victors on Poklonnaya Hill as it was getting dark.