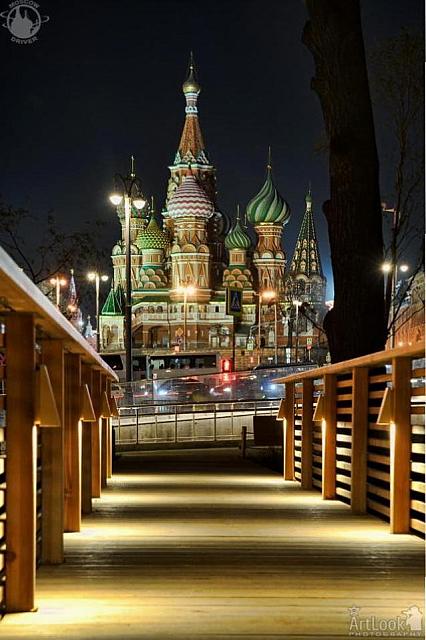 Illuminated with spotlights wooden bridge over the artificial pond in the area of the “Coastal Forest” of the park Zaryadye with a background of St. Basil’s Cathedral, one of the most famous Moscow, Russia attractions and one of the seven wonders in the world in autumn evening.

The new innovative park in the historical center of Moscow city shows the features of different Russia’s lands and includes artificial micro-climate areas with plants representing Russia’s steppes, tundra, wetlands, and forests. The spectacular Zaryadye Park was opened to great fanfare on September 9th, 2017, with President Vladimir Putin and Moscow's mayor to mark the 870th anniversary of the capital of Russia.

The Intercession Cathedral on the Moat, which in the last couple of centuries became better known as St. Basil’s Cathedral, was built in 1555-1561 by Tsar Ivan IV the Terrible (1530-1584) to commemorate the conquest of the Kazan Khanate (ancient Tatar kingdom of Volga Bulgaria) by the first Tsar of All the Rus (Russia). The construction of Intercession Cathedral at Red Square became one of the steps in promoting an idea to build Moscow as “The Third Rome” (after Constantinople).

The Remarkable Interior of the Cathedral of the Nativity

Inside the most ancient monument of Suzdal architecture – the white-stone Nativity Cathedral (Rozhdestvensky Cathedral) constructed in Suzdal Kremlin in 1222-1225 by Yuri II Vsesvolodovich, the fourth Grand Prince of Vladimir. The upper part of the cathedral was rebuilt not in white stone, but in brick in the 16th century.