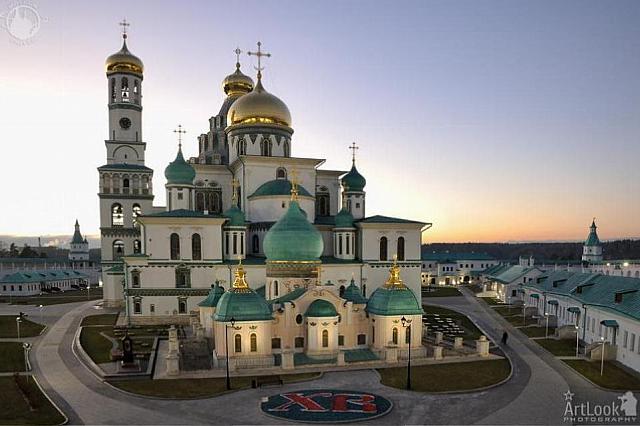 View from a top of the entrance gates on the magnificent architectural ensemble of the recently restored "New Jerusalem" Resurrection monastery in Istra illuminated with spotlights at autumn sunset.

The monastery on the river Istra was founded in the mid-17th century by Moscow Patriarch Nikon and developed into a single architectural complex from 1657 to 1697. As an exact replica of the Church of the Holy Sepulture, the complex recreates the Holy Land of Christians and is often called "Russian Palestine." In the foreground is the Church of St. Constantine and St. Helena, buried in the ground in imitation of the prototype in Palestine, which was dug out of a cliff.

Unfortunately, on the 10th December 1941 Nazi special troops (sappers) destroyed all the towers and temples of the great Voskresenskiy (Resurrection) monastery, leaving the Church of the Resurrection and most of the other structures in ruins.

In 1959, after restoration works, the museum was re-opened to the public, although the bell-tower has never been rebuilt, while the interior of the cathedral is still bare. The New Jerusalem Monastery was re-established as a religious community only in the 1990s.

Extensive restoration and renovation works of the New Jerusalem Monastery started in 2009 and finished completely in summer 2017. Estimated cost of the grandiose restoration sponsored from federal budget was about 20 billion Russian roubles ( about 350 million USD)