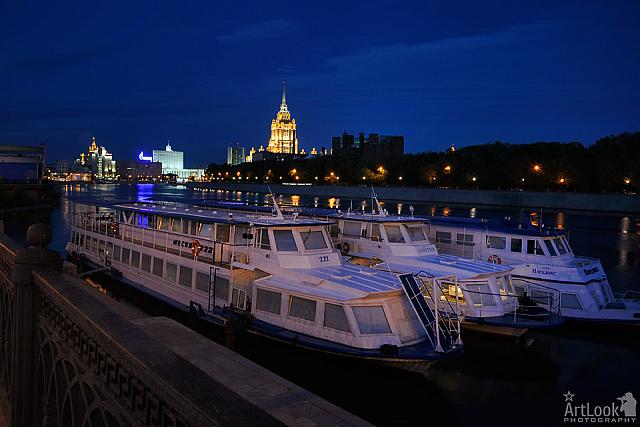 «Docked River Boats at Krasnopresnenskaya Embankment»
View on small river boats docked at Kranopresnenskaya Embankment of Moscow River at night. This type of city boats Muscovites called as "river trams" or "river shuttles". During summer season, every day from April until October, the boats follow a typical route every half and hour through Moskva Reka (Moscow River), from Kievskiy Railway Station to Novospasskiy Bridge and back, with several stops in the way. On background of this picture can be seen the White House (House of Government of Russian federation) and Hotel Radisson Royal (former hotel Ukraina, the one of famous Seven Stalin high-rises built in 1950s).
Next Previous 121 of 145

Amazing view from Sofiyskaya embankment of the River Moskva (Moscow) on the Grand Kremlin Palace and red brick towers in background of the modern skyscrapers of financial district Moskva-City under blue and pink twilight lighting in few hours before beginning of spectacular fireworks display over the main Moscow landmarks as part of the Russian Capital’s City Day.