Corinthian Columns and Plasterwork with Angels in Rotunda 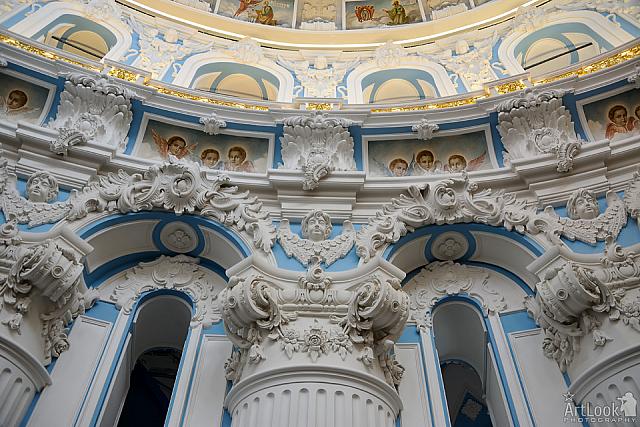 «Corinthian Columns and Plasterwork with Angels in Rotunda»

Fragment of the richly decorated half-rotunda with elegant Corinthian columns, plasterwork with angels and murals inside the Cathedral of the Resurrection after recently finished restoration works.

Built in the 17th century (1656—1685), this cathedral was the biggest architectural idea of Patriarch Nikon to make a Russian model of the Resurrection Cathedral (also called the Basilica of the Holy Sepulcher) in Jerusalem. The church is the one of most grandiose buildings of 17th century Russian architecture.

With regret to inform, in December 10 1941, Nazi special troops (sappers) blew all towers and temples of the great Voskresenskiy (Resurrection) monastery of New Jerusalem, leaving the Church of the Resurrection and most of the other structures in ruins.

The grandiose renovation of the cathedral started in 2009 was finally finished in 2016 and in present time the church as a replica from the Holy Land impress visitors of the Resurrection monastery in Istra (New Jerusalem) again with its magnificent architecture and church spirit.

The cheerful picture with funny Japanese fans on the Red Square in the background of the Kremlin walls. They said - Spasibo Russia (thank you Russia) and immediately added - JAPAN!!!!!!!!!!