Under the Amazing Tent of the Rotunda of the Holy Sepulcher 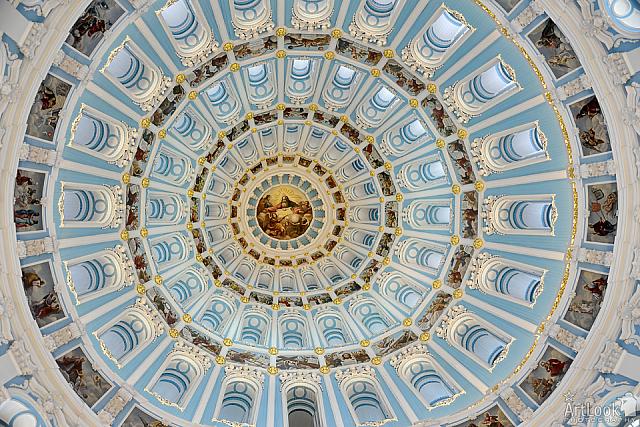 «Under the Amazing Tent of the Rotunda of the Holy Sepulcher»

Seen from below, the unusual and magnificent conical roof of the recently renovated Cathedral of the Resurrection rises magestically above a replica of the Holy Sepulcher, Christianity's "holy of holies”.

The original Cathedral was founded in 1656 by church reformer Patriarch Nikon and was intended to resemble a cathedral by the same name in Jerusalem. While this Church is decorated differently from the cathedral in Jerusalem,  it is strikingly identical in size and exterior design. It is considered to be the one of most grandiose buildings of 17th century Russian architecture, the model of the cathedral having been brought to Russia by the Greek Patriarch Paisy in 1649.

The Resurrection monastery (also called “New Jerusalem”) was founded in the middle of the 17th century by the Patriarch Nikon, in the small town of Istra located just 50 kilometers from Moscow. During this time, the monastery suddenly became a stronghold of the spiritual and geographical revolution.

Unfortunately  on the 10th  December,  1941  Nazi special troops (sappers) destroyed all the towers and temples of the great Voskresenskiy (Resurrection) monastery, leaving the Church of the Resurrection and most of the other structures in ruins.

Following extensive restoration works started in 2009,  the newly restored Cupola of the Cathedral of the Resurrection shines brightly, highlighted with gold and freshly painted in pale blue and white, and paintings of scenes from the Bible in accordance with historical photographs of the former cathedral.

Author of the monument: sculptor A. Rukavishnikov