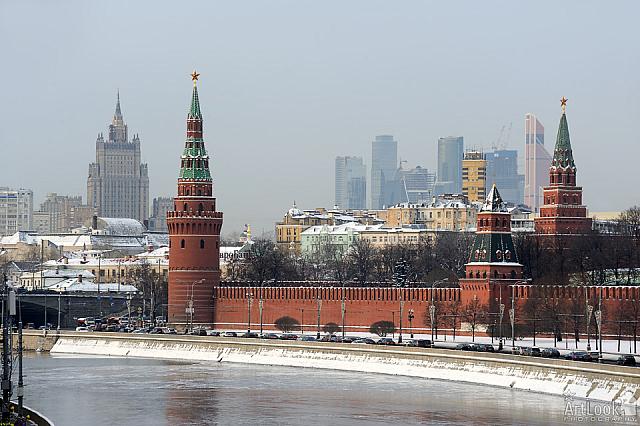 «Kremlin Towers against the Modern Architecture»

In the center of this composition is the Kremlin’s Vodovzvodnaya Tower (“water-lifting” tower), one of the main towers of the fortress with star on its spire. It is a corner round-shape tower with height 61.85 m (203 feet) located on the southwestern side of the kremlin overlooking the Moskva River. The tower was built in 1488 by an Italian architect Antonio Gislardi (also known as Anton Fryazin). Initially, the tower was called the Sviblova Tower after the Sviblov boyar family, who had lived in a house adjacent to the tower from the Kremlin's side. The tower was renamed to Vodovzvodnaya in 1633 after the installation of a water-supplying machine inside the tower. In 1805, the Vodovzvodnaya Tower was dismantled due to its dilapidation and built once again. In 1812, the retreating French army blew it up. It was restored in 1817-1819 by architect Osip Bove.

The stars on the main towers of Moscow Kremlin were placed instead of double-headed eagles, the symbol of knocked down tsarist Russia, in 1935-1937, during Stalin times.