Double-Headed Eagle on top of Church Chandelier in Lavra 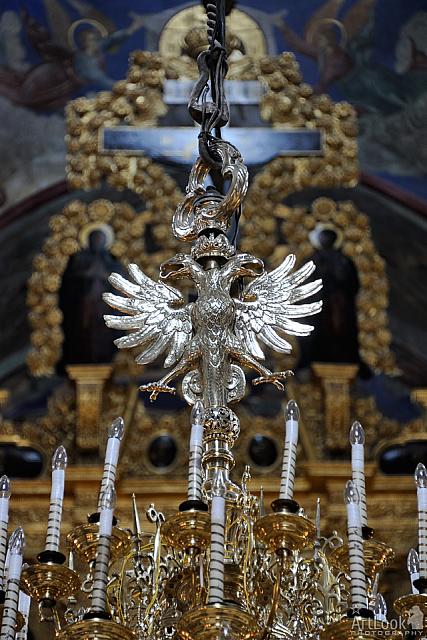 «Double-Headed Eagle on top of Church Chandelier in Lavra»

The state symbol of the tribe of the ruler appeared in Russia at the end of 15th century, when Grand Prince of Moscovy (Moscow Kingdom) Ivan III the Great married on Sophia Paleolog, a Byzantine princess and niece of Constantine XI, the last Byzantine emperor. No doubt that the symbol of an eagle with two heads was adopted by Ivan to connect the former Byzantine Empire and "The Third Rome" (as Moscow Kingdom was associated at that time) making Moscow successor of the New Empire after Constantinople.

The silver eagle on the picture shines highlighted with beams of the sun as like new being recently cleaned and polished before Orthotox Easter (it was on April 12 in 2015 year). To clean chandeliers before Easter – it is old tradition. The top of the magnificent five tier iconostasis with crucifixion and frescoes with angels and saints, the part of interior of the Assumption cathedral, also shining with bright colors being recently restored (2013-2014) during great restoration works in the monastery dedicated to celebration of 700 anniversary from the birth of the most venerated saint of Russia St. Sergius (1314-2014).

Photo #080 taken on April 24, 2015 during countryside tour to Sergiyev Posad with my Dear clients from Philippines, John and Felicity Blando and their beloved daughters, Julia and Bernie.

On the Way to the Church of Archangel Michael

Ana, my Dear Client from Canada, stopped for a moment on the cobblestone alley with tall leaf-bearing trees while walking to the beautiful Archangel Michael cathedral in Arkhangelskoe Estate.