Walking Down the Earthen Rampart 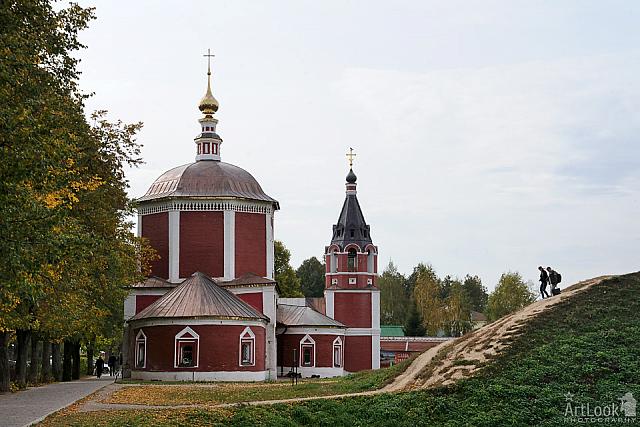 «Walking Down the Earthen Rampart»

Here we see a couple walking down the earthen embankment near the Church of the Assumption in Suzdal. This parish church was constructed on what was known as “the princely courtyard” during the second half of the 17th Century at the eastern part of the kremlin near a road where the Prophet Elijah’s Gate Tower once stood.

Dating back to the 12th Century, when it was the capital of the principality, the fortress was surrounded by a 1400 metre ring of earthen ramparts that have partially survived until the present day. Previously destroyed and reconstructed several times following wars and fires over the centuries, the wooden towers that formed part of the kremlin’s defences have not been reconstructed since the end of the 18th Century.

Nowadays, for many of the tourists coming to Suzdal, a walk along the ramparts reveals magnificent views of the ancient city which is filled with beautiful stone churches and colourful wooden houses decorated with old-fashioned windows displaying exquisite fretwork. Have a look at another picture of this church: Uspenskaya Church in Golden Autumn Season.

Take a look on another picture of this church: Uspenskaya Church in Golden Autumn Season.

Photo #539 taken on September 24, 2014 during long distance countryside tour of Golden Ring of Russia towns, Suzdal and Vladimir, with my Dear clients from Australia, Paul O'Tool, Bill and Robine.

Left angle view of the marble bust of Leonid Brezhnev in the Fallen Monument Park “Muzeon” in Autumn season. The bust was created in 1981 by Russian folk sculptor Anatoliy Bichukov. Leonid Ilyich Brezhnev (1906-1982) was a leader of USSR from 1964 till 1982, participant of the Great Patriotic War (1941-1945), four times hero of Soviet Union (the highest distinction in the country).