The Ogee-Arched Doorway into the Church of the Holy Spirit 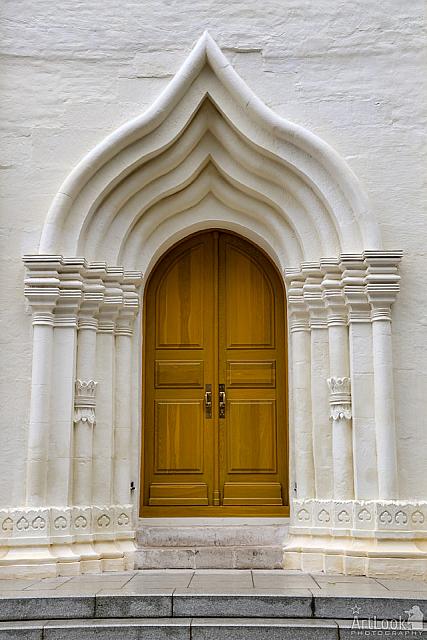 «The Ogee-Arched Doorway into the Church of the Holy Spirit»

The view on the Southern entrance of the ancient church of the Descent of the Holy Spirit upon the Apostles. The church built on the grounds of Trinity-St. Sergius Monastery in Sergiev Posad by Pskov masters in 1476 has three exactly the same portals (from North, West and South) with double ogee curves, which cut out of white limestone. The new doors of the church of Holy Spirit were set during restoration works in 20th century. The latest restoration of the church finished in spring 2014 to prepare the monastery to celebrate 700th anniversary from the birth of venerated St. Sergius of Radonezh.

Gothic ogee arches were constructed of a continuous double curve, convex above, concave below, shaped like the letter S lying on its side. Two ogees juxtaposed created an ogee arch, pointed with a double curvature. Popular in England from the 13th century onward for both secular and ecclesiastical buildings, ogee arches were used in doorways, window frames, and furniture decoration.

The view from a corner of GUM building, the well-known mall on the Red Square, on the beautiful St. Basil's Cathedral. The Main Department Store (GUM) is lavishly decorated with flowers during the summer festival.