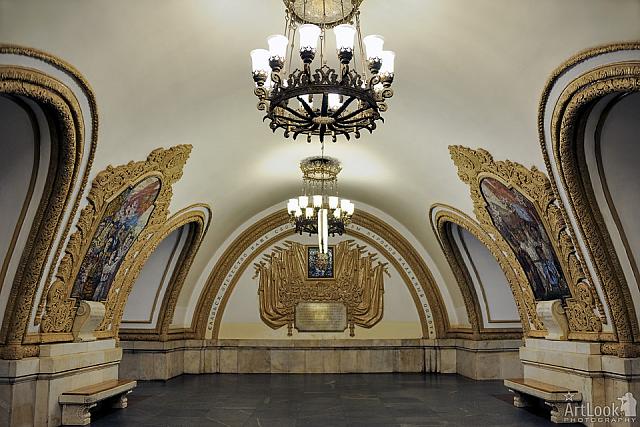 The Kievskaya-Ring station was opened on March 14, 1954 and named after Kiev Railway Station. It was built to commemorate the tercentenary of the Ukrane joining with Russia and it’s beautiful d?cor with rich mosaics reflects the history of Ukraine and Russia from the Pereslavl Rada to Soviet time, middle of 20th century. The station was the brainchild of Nikita Sergeyevich Khrushchev, who was elected First Secretary of the communist Party in 1953 and finally got the opportunity to build a station worthy of his native Ukraine. Among the 40 submitted designs from Moscow and Kiev architects it was picked in competition the project by builders from Ukraine under E. Katonin, active member of the Academy of Architecture of the Ukrainian Soviet Socialist Republic. The Ukrainian architects avoided any constructional innovations, making active use of the achievements of preceding generations of Metro builders: the flaring pylons and parabolic vault were borrowed from L. Polyakov (Arbastkaya station on Arbatsko-Pokrovskaya line), and the narrow ornamental band describing the arches reminds one of Novosloboskaya station. The track walls and lower section of the pylons are faced with Koyelga marble, and the floor is paved with grey granite tiles.

The rich foliate d?cor and eighteen mosaic panels give the station an opulent molded frame with Ukrainian ornamental motifs. The sketches for the mosaics were by A. Mizin, a corresponding member of the Ukrainian Academy of Architecture, who worked with a team of assistants. The end wall of the central hall has a large panel of moulded flags with a mosaic portrait of Vladimir Lenin in the middle. Photo #064 taken on June 16, 2015 ©2015 www.Moscow-Driver.com by Arthur Lookyanov

Monument "The Worker and the Collective Farmer" at VDNKh

One of the iconic monuments of the Soviet era at one of entrances into VDNKh, the Exhibition of Achievements of the People's Economy founded in USSR in 1935.