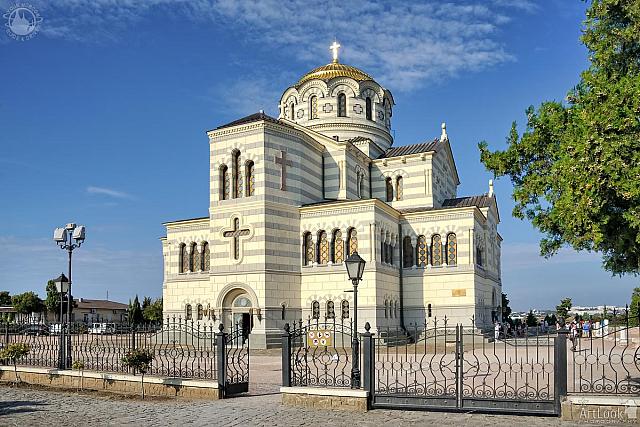 The grand Cathedral dedicated to St. Vladimir, the patron saint of Prince Vladimir of Kiev, was founded in 1861 in the presence of emperor Alexander II to commemorate the baptizing of the prince in 988 at this place and adopting Christianity in the state to replace pagan idols. The church was designed by Grimm D.I., prominent academician of architecture, in Byzantine style. The temple was being erected very slowly and was consecrated only in 1891.

Vladimir Cathedral became part of the large Chersonesos monastery, which was closed during Soviet times. With regret to inform, it was blown up in 1944 by Nazis before they were crashed in Crimea by Soviet Army forces. And only at the end of 20th century, in 1999, the restoration work began. Today it is the major Orthodox temple in the Crimea. Erected in Byzantine style of architecture it has become a solemn monument to the baptizing of Rus and one of the major sacred places of the Orthodox Church.

In present days, unfortunately, it is not allowed to take photos inside the church to capture its beautiful interior.