In front of Triumphal Gate at Night 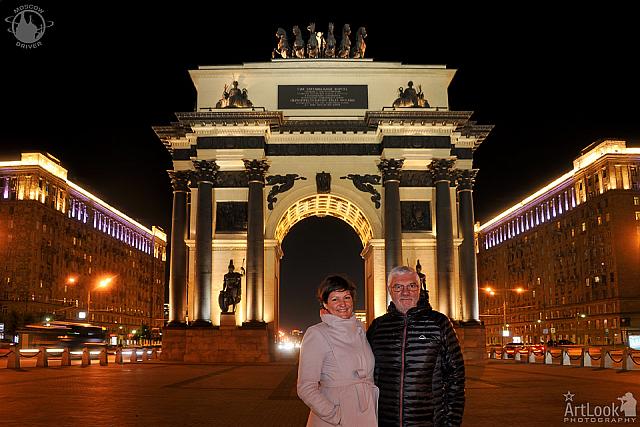 «In front of Triumphal Gate at Night»

My dear clients from South Africa, Othelia Langner with her father Ben, in front of the Arch of Triumph on Kutuzovsky avenue during 3-hour evening tour of the best highlights of Moscow city at night.

The Triumphal Gate is the Symbol of Victory of Russian People in Patriotic War 1812 against Napoleon. It is the War Memorial and Monument of Architecture built in 1829-1834 by design commissioned from the renowned architect Osip Bove (Joseph Bov?).

Angle view from metro station Borovitskaya on the rising above the city Pyotr Pashkov’s house in the twilight of a nice and warm spring evening. Located right in the center of the capital, Pashkovs house is one of Moscow’s most beautiful mansions. It was built in 1786 just opposite the Borovitskaya Kremlin Tower mansions. This building is one of the most significant architectural landmarks of the 18th century, a masterpiece of the epoch of classicism. It used to be home to the Rumyantsev Museum—Moscow's first public museum—in the 19th century. The palace's current owner is the Russian State Library.