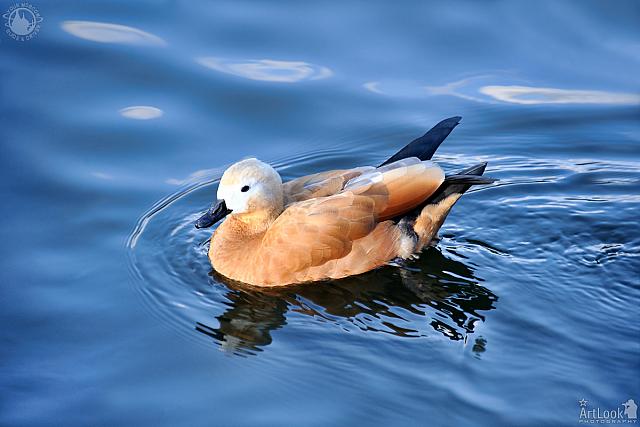 The ruddy shelduck (Tadorna ferruginea) is a member of the shelduck genus Tadorna; in the wildfowl family Anatidae. The bird was first described in 1764 by the German zoologist and botanist Peter Simon Pallas who named it Anas ferruginea, but later it was transferred to the genus Tadorna with the other shelducks. The genus name Tadorna comes from the French "tadorne", the common shelduck, and may originally derive from a Celtic word meaning "pied waterfowl". The English name "sheld duck" dates from around 1700 and means the same. The species name ferruginea is Latin for "rusty" and refers to the color of the plumage.

On the external appearance and a number of characteristics occupy an intermediate position between the geese and the ducks. Nest in burrows (they dig themselves in clay cliffs, or occupy the abandoned burrows of marmots, badgers, and foxes); in the banks of the banks, crevices. On the ground walk easily and quickly. The female and the male take care of the offspring together. Very aggressive in protecting the territory and chicks. They feed on animal and vegetable food, collect it in shallow water, immersing the neck and the front of the body in the water. Usually, do not dive.