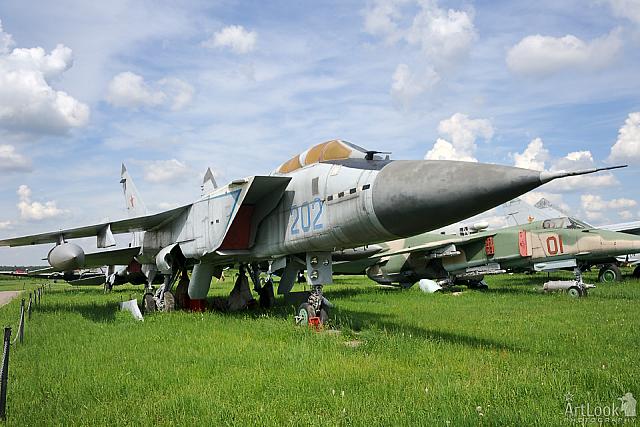 «Interceptor aircraft MiG-31 “Foxhound” (1975)»
The Mikoyan MiG-31 (NATO reporting name: Foxhound) is a supersonic interceptor aircraft developed to replace the MiG-25 "Foxbat". The MiG-31 was designed by the Mikoyan design bureau based on the MiG-25. The first fighter having performed flight over the North Pole. Test-pilot A. Fedotov Design Bureau: A. Mikoyan OKB Chief Engineers: G. Losino-Losinsky, Л. Vasilchenko, A. Belosvet, A. Kostrubsky. Like the MiG-25, MiG-31 is a large twin-engine aircraft with side-mounted air intakes, a shoulder-mounted wing with an aspect ratio of 2.94, and twin vertical tailfins. Unlike the MiG-25, it has two seats, with the rear occupied by a dedicated weapon systems officer. Like its MiG-25 predecessor, the MiG-31 was surrounded by early speculation and misinformation concerning its design and abilities. The West learned of the new interceptor from Lieutenant Viktor Belenko, a pilot who defected to Japan in 1976 with his MiG-25P. Belenko described an upcoming "Super Foxbat" with two seats and an ability to intercept cruise missiles. According to his testimony, the new interceptor was to have air intakes similar to the Mikoyan-Gurevich MiG-23, which the MiG-31 does not have, at least not in production variants. Series production of the MiG-31 began in 1979 and about 400 were produced by 2000. Development of a more comprehensive advanced version, the MiG-31M, began in 1983 and first flew in 1986, but the dissolution of the Soviet Union prevented it from entering full production.[citation needed]The MiG-31M standard adds some additional features like Global Positioning System (GPS) and GLONASS receivers, and three color CRT MFDs in the rear cockpit. Several other variants have been developed, including a dedicated anti-satellite missile carrier, the MiG-31D; a similar satellite-launching aircraft, MiG-31A; a proposed multirole version, MiG-31F; and a downgraded export version, MiG-31E; but none have been built. Some upgrade programs have found their way in the MiG-31 fleet, like the MiG-31BM multirole version with upgraded avionics, new multimode radar, hands-on-throttle-and-stick (HOTAS) controls, liquid crystal (LCD) color multi-function displays (MFDs), ability to carry the Vympel R-77 missile and various Russian air-to-ground missiles (AGMs) such as the Kh-31 anti-radiation missile (ARM), a new and more powerful computer, and digital data links. A project to upgrade the Russian MiG-31 fleet to the MiG-31BM standard was begun in 2010; 60 or more aircraft are to be upgraded to MiG-31BM standard by 2020. Russia hopes to field a replacement for the MiG-31 by 2020, with all aircraft retired by 2028. Development of a new aircraft has begun. Development of a new interceptor is favored over restarting MiG-31 production. 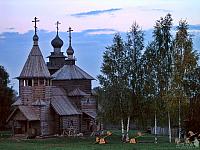 Sunset over the Wooden Churches and Birch Trees

The picture of the beautiful medieval Russian wooden churches surrounded with birch trees I took with my dear American client at the evening, when we arrived to Suzdal and decided to visit interesting local museum of wooden architecture and peasants' life.