Round Dance Khorovod at Turetsky Choir Concert at VDNKh 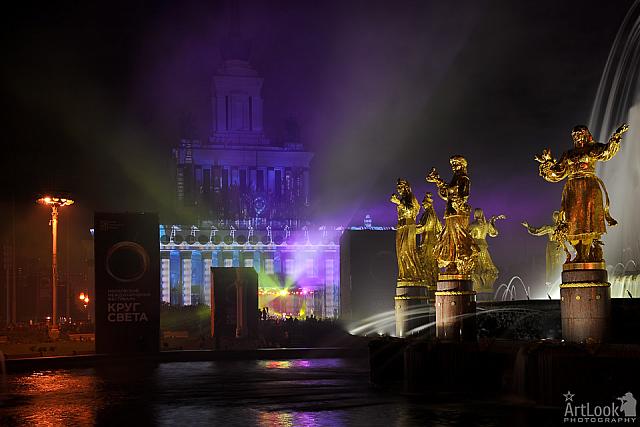 «Round Dance Khorovod at Turetsky Choir Concert at VDNKh»

Gold-plated female figures of the fountain “Friendship of Peoples” looks like perfoming Russian folk round dance “Khorovod” at Turetsky Choir Concert in front of the Central pavilion “House of Nations of Russia” on the second day of the 6th International Festival "Circle of Light" 2016 in Moscow. During the light show, the fa?ade of the pavilion number one at VDNKh exhibition center become a screen for unique 3D-projections and night sky over the square of Friendship of Nations were lit by powerful spotlights and lasers from the stage.

The “Friendship of Nations” fountain was created in 1954. It was meant to become one of the main symbols of the exhibition. However, it became the symbol which reflects the celebration and high spirits associated with the victory in the WWII, embodying the national dream of prosperity in the whole world. The shining even at night gold-plated female figures symbolize all republics of USSR. The girls dressed in national costumes of each republic of Soviet Union have gathered around the fountain in a circle dance called in Russia “khorovod”.

20-meter giant balloon "Time of the First" in the form of an astronaut in a spacesuit flying near shopping and entertainment center Vegas Crocus City under grey clouds. It was launched into the sky over Moscow on April 12, 2017, Cosmonautics Day. The big-budget space exploration movie Vremya Pervykh (Time of the First) by Timur Bekmambetov’s company Bazelevs was released in Russia in 2017 to the current 56th anniversary of Yuri Gagarin's flight into space.