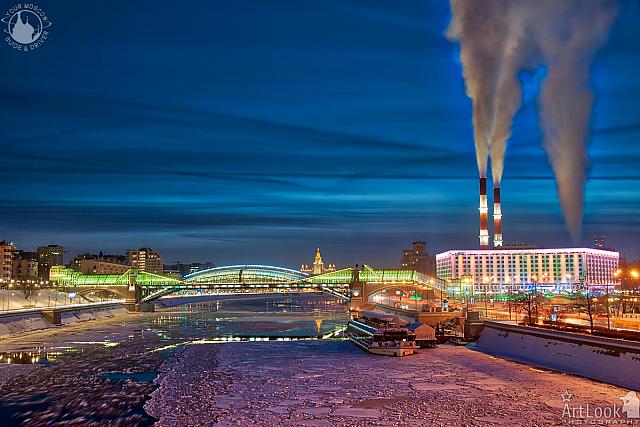 Moscow winter cityscape with the view from Borodinsky (Borodino) Bridge on the icy river Moskva (Moscow), the River Palace pleasure boat and restaurant locked in the ice at a frozen berth, covered glass illuminated Bohdan Khmelnytskyi Bridge, hotel Raddison Slavyanskaya, and impressive steam clouds behind it rising up from chimneys of a heating plant in twilight at the cold winter day.

The frozen berth "Kievsky Railway Station" is located at Berezhkovskaya embankment near the railway and metro station “Kievskaya”, dedicated to Kiev, the capital of Ukraine, and the pedestrian bridge named in honor of the national Ukrainian hero Bohdan Khmelnytskyi. It was constructed in 2001.