Dormition Cathedral Shining Under Beams of the Spring Sun 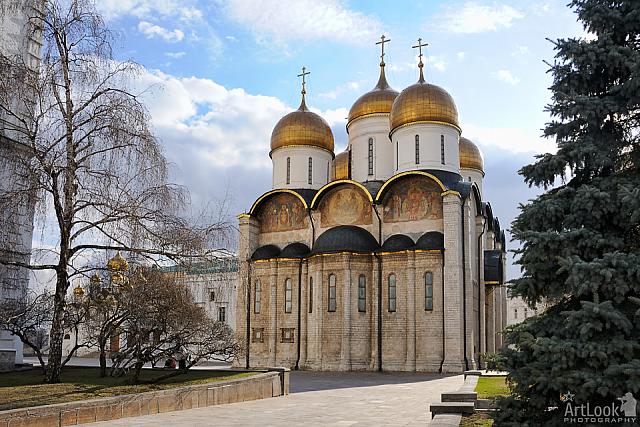 «Dormition Cathedral Shining Under Beams of the Spring Sun»

The Dormition (Assumption) Cathedral of Moscow Kremlin occupies a prominent place in Russian history and culture. For many years, the church was the state and religious center in Russia. Grand princes were ordained, appanage princes swore their oaths of allegiance and tsars and emperors were crowned here.

The importance of the Dormition Cathedral in the political and religious life of the nation defined the special attention paid to its architecture and interior d?cor. Over the centuries, famous architects, artists and jewelers helped to decorate the walls and facades. The construction and reconstruction of the Dormition Cathedral are inherently linked to some of the most important periods in Russian history. Founded in early of 14th century, the cathedral was reconstructed at the end of 15th century during the reign of Ivan III (The Great) who invited for this purpose Aristotle Fiorovante, a famous Italian engineer and architect from Bologna. Designed on the model of its namesake built in Vladimir in the twelfth century, the majestic Cathedral was built within 5 summers and officially consecrated on August 12, 1479. The five-domed cathedral was laid from small blocks of white stone. It was built much bigger than the Assumption Cathedral in Vladimir and contemporaries were particularly struck by its grandeur, height, lightness and space.

Photo #119 taken on April 21, 2015 during tour of Moscow Kremlin with my Dear clients from Philippines, John Blando with family.

Lights of the Church of St. George at Twilight

View of the illuminated by spotlights the church of St. George the Victorious at spring twilight when the old-fashioned street lamps were just turned on. The golden-domed church was erected in a neo-Russian style of architecture on the hilltop of Poklonnaya Hill in 1993-1995.