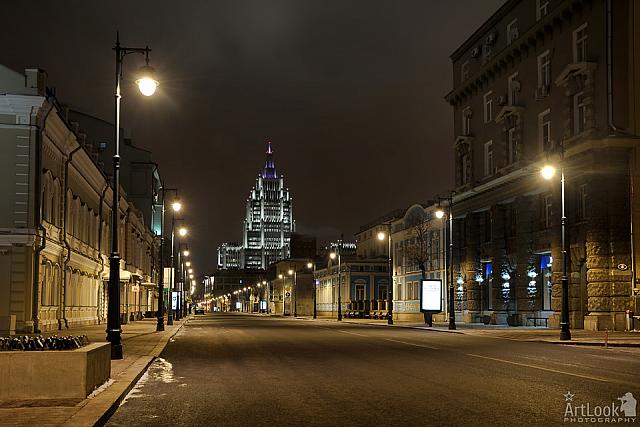 Night view of Malaya Dmitrovka street in cold winter night with background of a new impressive high-rise building “Oruzheyny” (Armory) located in the center of Moscow in the Garden Ring. Malaya Dmitrovka street was revamped in summer 2016 under the city project “My Street”. The sidewalks were widened and paved with granite stone, overhead cables were moved underground, more trees planted, and navigation posts with Wi-Fi installed, and the street as many overs became more bright and festive at nights with new old style street lamps.

The multifunctional complex “Oruzheyny Commercial Center”, that can be seen in background of this picture, was built in 2015 by project of architects Mikhail Posokhin and Mikhail Plekhanov, designer bureau of «MosProyekt 2» building company.

The 35-story skyscraper topped with spire about 35 meter consists of stepped vertical volumes of different height and rises about 165 meters over prestigious area of the historical center of Moscow city. The building resembles the Stalinist period of industrialization and high-rise project infamous Palace of Soviets, which was to be built on the site of the temple of Christ the Savior. Having official name “Oryzheyny” (Armory) by the name of the street where the building is located it received a nickname "Pyramid of Cheops" for it controversy appearance (some people response about it with excitement, some people describe as weird). To complete the project of the huge business center on the Garden Ring took about 10 years. Founded in 2006 it became one of protracted buildings which constriction were postponed, long lasting because of economic crises that broke in 2008.

The bronze equestrian statue of Saint George the Victorious striking his dragon with spear against a blue sky in a spring season. The Dragon symbolizes Nazi Germany with broken swastikas on its wings. The author is sculptor Zurab Konstantinovich Tsereteli.