Stalinist High-rise Residential Building in Kotelniki in the Dusk 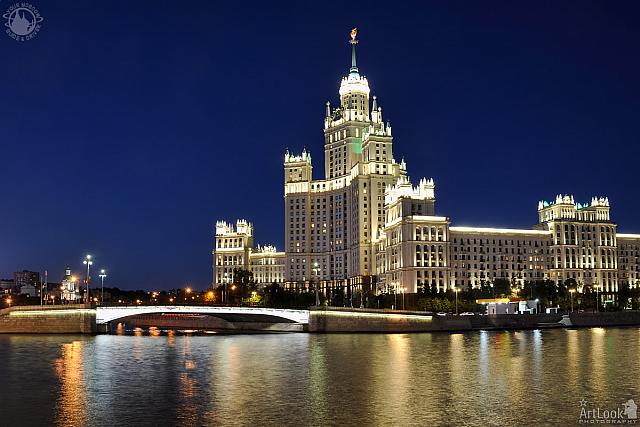 «Stalinist High-rise Residential Building in Kotelniki in the Dusk»

Night view of the illuminated Stalinist high-rise residential building on Kotelnicheskaya embankment from the opposite Kosmodamianskaya embankment of Moskva (Moscow) River in the summer dusk. It is one of the well-known Seven Sisters laid down by the order of Stalin in 1947. The main 176 meter (577 ft) tall tower was laid down in the area where small Yauza river joins the main river of the city, Moskva (Moscow) River and was built to be facing the Moscow Kremlin. The high-rise building in Kotelniki was completed in 1952 and incorporated with a 9-story apartment block facing Moskva River, designed by the same architects in 1938 and completed in 1940. As all Stalin skyscrapers, the building was topped with a spire and Soviet star with hammer and sickle, symbols of the former USSR. Apartments in the building were granted to the Soviet elite, academicians, professors, writers, sportsmen, and others.

Red and Yellow Tulips in Flowerbed at Livadia Palace

Beautiful colorful red and yellow tulips in a flowerbed of a fountain area at Livadia Palace in the springtime.