St. Basil’s Porch and Spasskaya Tower in the Dusk 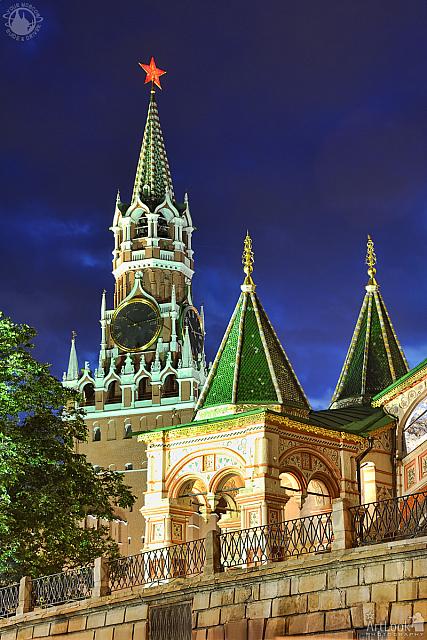 «St. Basil’s Porch and Spasskaya Tower in the Dusk»
Buy this Photo

View from Vasilievsky Spusk (Basil’s Slope) on the beautiful porch of St. Basil’s Cathedral behind a fence and Spasskaya (Savior’s) Tower of Moscow Kremlin topped with shinning five-edge red star in the dusk under a dark grey cloud. The Savior’s tower also known as Kremlin Clock tower is the main tower of Moscow Kremlin located on the Red Square. It was built by design of Italian architects at the end of 15th century as a part of the protection of the residence of Moscow princes and later Russian tsars. The top level with spire was added to the tower in the middle of 17th century, and huge clock with chimneys was installed in the 19th century. The magnificent Spasskaya Tower is symbol and emblem of Moscow city, the capital of Russia.

Photo #149 taken on June 03, 2018 during Moscow by Night tour with my dear client from USA/Canada, Terry Lukie.