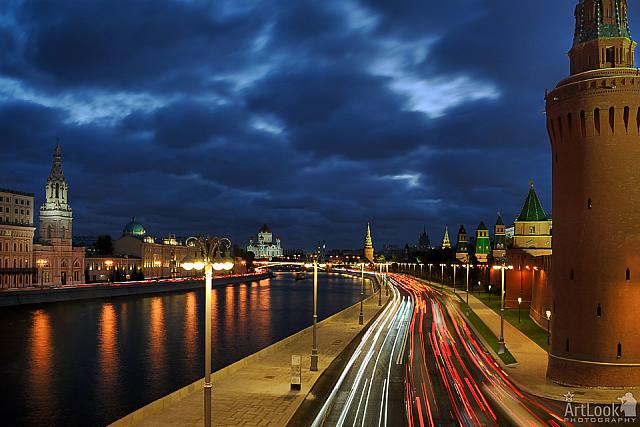 View from Bolshoi Moskvoretsky Bridge on the bright new street lights and lines of car lights at the embankment of Moscow Kremlin at night. The grey clouds above Moscow city make some dramatic atmosphere to the cityscape.

At the beginning of September 2016, when Moscow city marked its 869th anniversary, the bulk of the improvement work on the Kremlin Embankment (Kremlyovskaya Naberzhnaya) had been completed under the city project “My Street”. Here the sidewalks were widened from 2.5 to 3.2 meters, and overhead cables were moved underground, more trees planted, and navigation posts with Wi-Fi installed. The embankment became more bright and festive at nights, but the traffic in rush-hours is still quite intense as can be seen from lines of car lights on this picture. And this is no wonder, accounting that how many cars move along the Kremlin walls. According the official statistic, a total of 3.5 million cars are registered in Moscow, and another 600,000 to 800,000 enter from the Moscow region alone every day.

The famous canvas “The Black Sea” (Storm Breaking on the Black Sea) was created in 1881 by the most popular Russian marinist Ivan Aivazovsky (1817-1900).