Foot Guards Give a Way to Cavalry 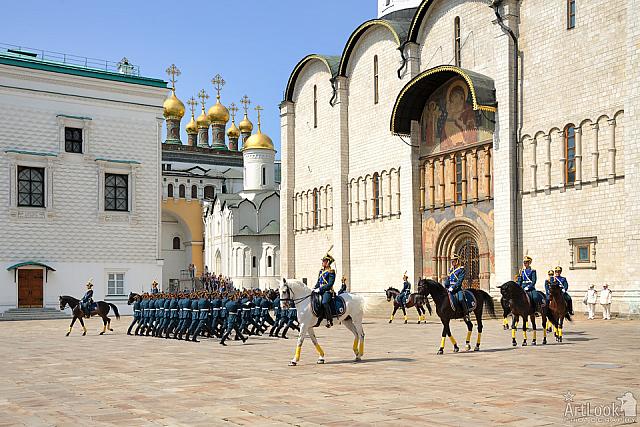 «Foot Guards Give a Way to Cavalry»

Reestablished in 2005, the ceremonial changing of presidential guards in Cathedral Square at the Moscow Kremlin became one of the most fascinating military parades in the world. The 25-minute ceremony consists of two parts and includes performances by the foot and cavalry guards. On the picture is shown a moment when the solders of the Presidential Regiment give a way to cavalry on the beautiful horses marching to the side of Assumption cathedral at the end of their exciting performance. The Kremlin Regiment uniforms are similar to the uniforms of the Imperial Guard regiments from the time of Tsar Nicholas II.

Photo #137 taken on July 16, 2016 during tour of Moscow Kremlin with my dear clients from USA, Andrew and karen Green.

Lunokhod 1 (Eng: Moon Walker) was the first of two unmanned lunar rovers landed on the Moon by the Soviet Union as part of its Lunokhod program. The spacecraft which carried Lunokhod-1 was named Luna 17 (Moon 17). Lunokhod was the first roving remote-controlled robot to land on another celestial body.