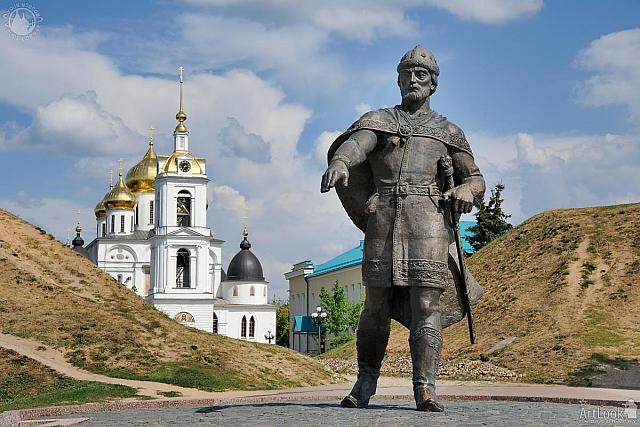 The monument to Grand Prince Yuri Dolgoruky, the founder of many cities in Russia including Moscow and Dmitrov, was unveiled in Sovetskaya square at the Southern entrance into Dmitrov Kremlin, the historical center of the city, on June 29, 2001. The Dmitrov city is seven years younger than Moscow and was founded in 1154 by Prince George “Long-with-arm”, as the English call him. Yuri Dolgoruky, the Prince of Suzdal and Grand Prince of Kiev, a son of Vladimir Monomakh, married Gyda, the daughter of Harold II of England. Like his father, Dolgoruky was a man of great energy and did much to found new towns as well as strengthen and improve the old towns within his territory.

The monument of Dolgoruky in Dmitrov was cast from bronze, but he is not posing on horseback, unlike the famous monument of Yuri on Tverskaya street in Moscow. The monument was created by sculptor Vadim Tserkovnikov, who thought that without a horse, Dolgoruky would look more democratic, so the monument would correspond to a real image of this historic statesman. According to legend, it is here that the prince was told of the birth of his son Dmitry, in whose honor this town was founded.

When looking at this monument, the words from the famous poem of Alexander Pushkin, "The Bronze Horseman," involuntarily come up in mind: "… Here a great city will be wrought!" The poet was talking about St. Petersburg, of course, but I think that this expression fits very well here.

In background of the picture, behind the earthen rampart, stand majestic Assumption cathedral with gilded onion-shape domes and three-level bell tower topped with gilded spire and cross.

The Carved Stone from Jerusalem

This carved stone was brought to Vladimir from Jerusalem during construction of the cathdral of St. Demetrius in 12th century.