The Unique Testament to the Ambitions of Peter’s Age 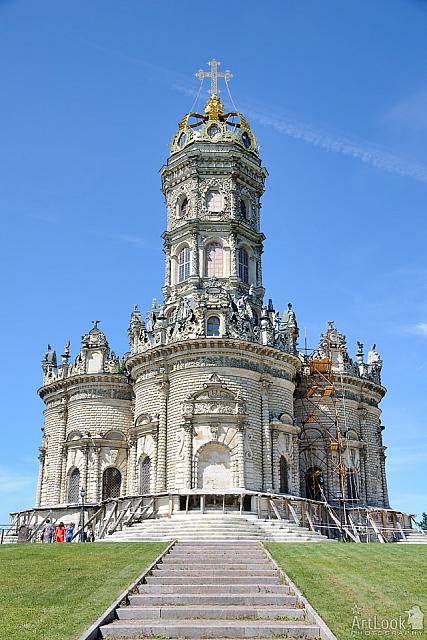 «The Unique Testament to the Ambitions of Peter’s Age»

The Church of the Sign of the Most Holy Mother of God was built by foreign artisans at the request of Peter the Great’s teacher, Prince Golitsyn in 1690.

The church, located in the village of Dubrovitsky on the southern outskirts of Moscow, was built in an unmistakably Catholic and ornate Baroque style, and became Russia’s first “window on the West” shortly before the new capital of St. Petersburg was founded on a swamp near the Baltic sea. On its completion the Patriarch of Russia refused to bless the building.

In honour of Peter’s reign, the church was topped with a shining gold crown, a gesture by Golitsyn to mend his relationship with Peter following a falling out over Peter’s brother’s involvement in the Streltsky rebellion. Its namesake, the Sign of the Most Holy Mother of God icon, is a symbol of reconciliation. The church still stands today, a unique testament to the ambitions of Peter’s age.

Unfortunately, the adjoining estate, which formerly housed a small museum, is currently closed to visitors.

This photo was taken when the church basement and some of the many sculptures that decorate the church exterior were under renovation.

Fragment of interior of the Kievskaya-Ring station that was designed by a team of architects and artists from Ukraine and opened on March 14, 1954, to commemorate the tercentenary of the Ukraine joining with Russia (1654-1954).