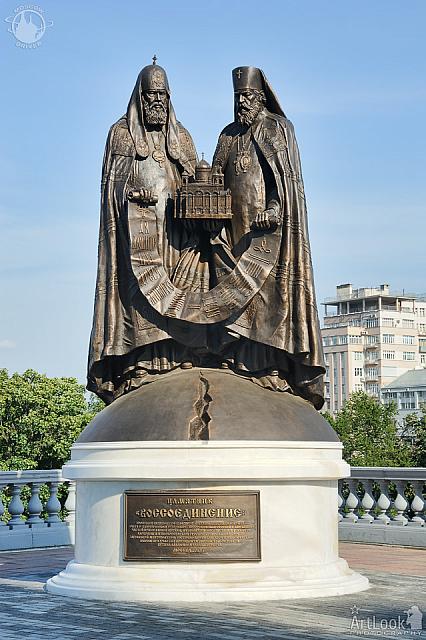 View from eastern side of the Cathedral of Christ the Savior on the monument dedicated to 10th Anniversary of Restoring the Unity of the Russian Orthodox Church. The sculpture is dedicated to the historical event of the signing of the Act of Canonical Communion between the Moscow Patriarchate (MP) and the Russian Orthodox Church Outside of Russia (ROCOR), which took place in Christ the Savior Cathedral on May 17, 2007.

The composition of bronze, installed on the eastern stylobate of the cathedral, depicts the now-deceased Patriarch of Moscow and All Russia Alexy II and the First Hierarch of the Russian Orthodox Church Abroad, Metropolitan Laurus of the East American and New York, standing on the broken globe and holding the Cathedral of Christ the Savior and the signed Act in their hands.

The monument "Reunification" was consecrated by Patriarch of Moscow and All Russia Kirill on June 18, 2017

Architectural works on the creation of the monument were made in the art workshop of Gennady and Anatoly Kuznetsov by architect Goran Dragichevich and sculptors Pavel Zhuravlev and Alexander Nozdrin.

Photo #083 taken on September 12, 2017 during a city tourwith my dear client from Denmark, Adrian Durrani. 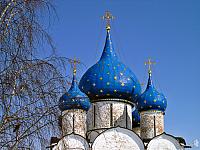 The view on the beautiful blue domes with golden stars of the Cathedral of the Nativity of the Virgin, which is located in Kremlin of Suzdal. These domes looks very imressive and magnificent...