Kremlin Towers and Skyscrapers of Moskva City in Winter 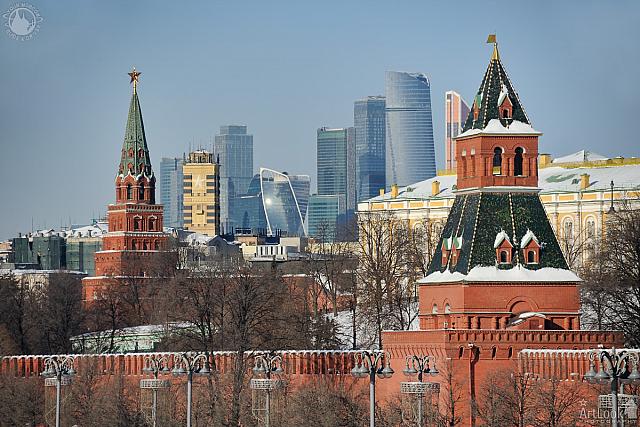 «Kremlin Towers and Skyscrapers of Moskva City in Winter»

The contrast of Moscow architecture with the view from Bolshoi Moskvoretsky Bridge on the modern high-rise buildings of International Business Center “Moskva-City” (Moscow City) between ancient towers of Moscow Kremlin covered snow on a frosty day at the beginning of calendar spring.

Photo #051 taken on March 17, 2018 during city tour with my dear client from Sweden, Marawan Abdelhady.

At the eastern part of Sofiyaskaya embankment you can see an impressive bell tower of the Saint Sophia Church in Middle Sadovniki. The tall tent-roof bell tower was built in 1862-1868, facing the Kremlin (over the side of Moskva river). The mid-17th-century Russian Orthodox parish church of Saint Sophia is hidden behind the modern buildings attached to the belfry on the Balchug Island opposite the Moscow Kremlin.