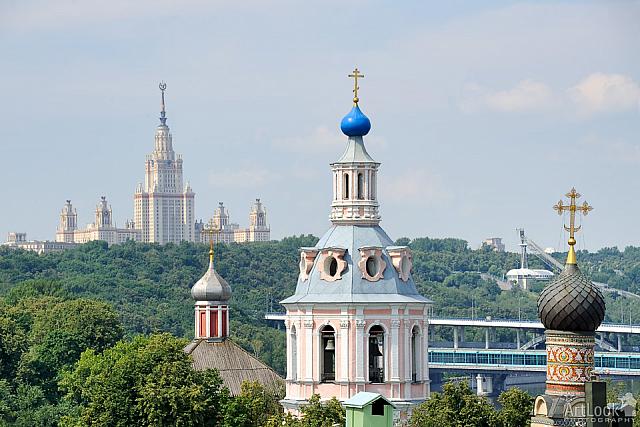 Every old city abounds historical contrasts of architecture and Moscow founded in middle of 12th century is no exception.

On this picture is shown the contrast of the church architecture of 17-18 century and the soviet gothic architecture of middle of 20th century. It is the view from observation platform near the building of Russian Academy of Sciences on top of bell tower and cupolas of churches of St. Andrew's Monastery (Andreev Monastery) with background of the main building of Moscow State University (MGU) located on Sparrow Hills (Vorobyovy Gory). MGU building is the one of Stalin high-rises also known as “Seven Sisters” buildings constructed in Moscow after WWII in so-called 'Stalinist Gothic' style.

Photo #059 taken on July 03, 2016 during Communist tour with my dear clients from India, Venky Babu and her husband.

With Beloved Camera at Red Square