Architectural Ensemble of St. Nicholas and Nativity of Christ Churches 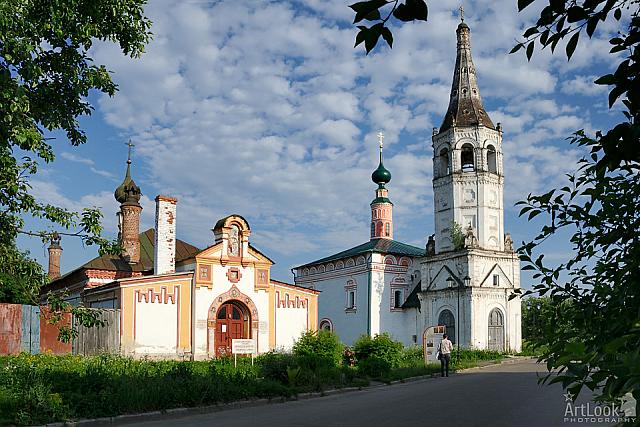 «Architectural Ensemble of St. Nicholas and Nativity of Christ Churches»
According to chronicles, on the site where stand in present time these nice churches on the grounds of Suzdal Kremlin already in 12th century existed monastery dedicated to the one of the most venerated saints in Russia. St. Nicholas always was considered as a patron of travelers, that is why the place for the church was determined not by accident, but near waterway, connecting Suzdal with another cities. After 1719 rage fires many wooden churches in Suzdal city were rebuilt in stone. The big summer stone church of Saint Nicholas (on the left on this picture) was on construction in the kremlin from 1719 till 1739. On the right is standing its bell tower, the building with perfect proportions and beautiful details of its exterior. The top of the tower was adorned with concave tent-shaped spire, the feature of Suzdal architecture. The small winter church of Nativity of Christ was built near the bell tower in 1771 (on this picture it is between St. Nicholas church and bell tower).
Next Previous 14 of 31