The Unique Jordan Canopy in Bell Tower of Suzdal Kremlin 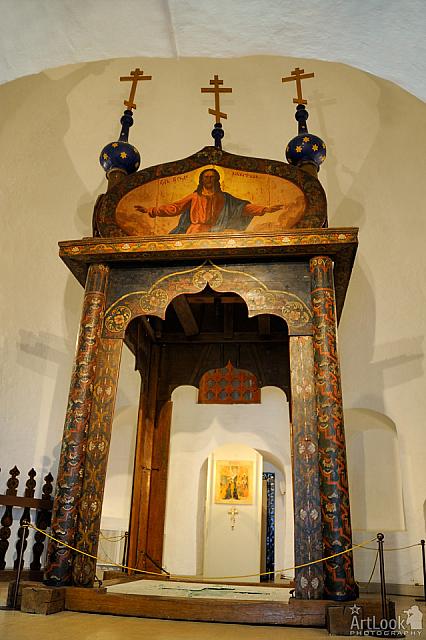 «The Unique Jordan Canopy in Bell Tower of Suzdal Kremlin»

The wooden curved Jordan Canopy is the unique monument of decorative art. It is the only Jordan Canopy, which has survived from 17th century in Russia.

On the Epiphany Day, the canopy was placed over and ice-whole (called “the Jordan”), on the Kamenka river. Many people took part in the cross procession to the river where a priest put a cross into the cross shaped ice-hole for blessing the water. The canopy was made to order for Metropolitan Hilarion of Suzdal by local craftsmen at the end of 17th century. It was assembled on the Epiphany Day, and the rest of the year was kept knocked down.

The canopy is 8,5 meters (28 ft) high, consists of 260 separate parts cut of pine wood with an axe, has the shape of a five-domed church and rests on 4 round carved pillars. In the 17th century, the canopy was painted with tempera. Ornaments with twisted branches, leaves and flowers (called “grasses”) prevailed.

In the 19th century, the lost fragments in the ogee arches at the top (“God the Father”, “Christ the Almighty”, “Holy Virgin of the Sign”, “Descent of the Angel to the Font”) were repainted in oil.

The canopy was restored by specialists of the museum and presented in local bell-tower to visitors of Suzdal kremlin on January 5th, 2007.

Photo #458 taken on August 28, 2013 during a tour of the Suzdal kremlin museums with my Dear clients from Australia, Rob and Liz Adams.

Resurrection Church in Kadashi at Night

The view of a beautiful tall five-domed church of the Resurrection in Kadashi Sloboda (Yakimanka District) with a bell tower framed with trees at night. The church was constructed between 1687 and 1695 and considered as one of the finest examples of Naryshkin Baroque (also called Moscow Baroque) style of architecture.