Interior of the Cross Chamber 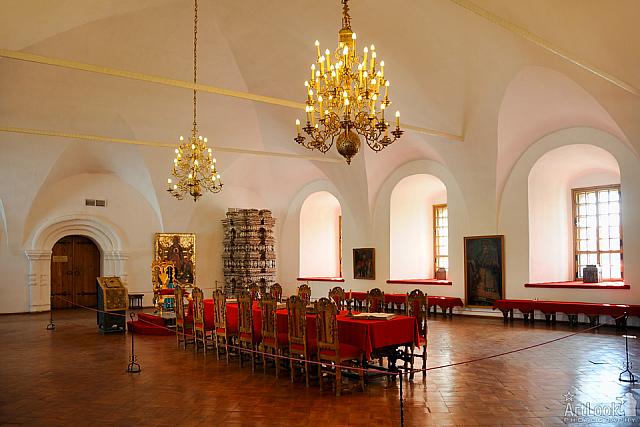 «Interior of the Cross Chamber»

The chamber for solemn receptions in the Archbishops Palace was built at the turn of the 17th-18th centuries under Metropolitan Hilarion of Suzdal. The huge hall of the chamber (with the area of more than 300 sq. m and 9 m high) is vaulted without supporting bars - a very rare phenomenon in the architecture of that time.

After the reconstruction of the building in 1970, the interior of the Cross Chamber was recreated in accordance with the inventory of 1788. Here you see the objects, characteristic of the Old Russian way of life in the 17th century (a trunk, irons, benches, chests), as well as those appeared in the 18th century (a cabinet, chairs, portraits and maps on the walls). The floor is paved with oaken tiles, the furniture is also wooden. On the walls, there are icons, portraits of «spiritual and royal persons» and maps. At first the calorific system was used for heating the chamber, but in the 18th century the stoves, decorated with ceramic tiles «in the Dutch manner» were added to it.

The chamber is lit by three chandeliers (two of which are of the 17th century, the third one was made anew). Bright red tablecloths and covers for benches and windowsills add to the festive and solemn atmosphere of the chamber.

Photo #421 taken on August 28, 2013 taken during a tour of the Suzdal kremlin museums with my Dear clients from Australia, Rob and Liz Adams.