Mosaic Icon of Our Lady of Kazan in Assumption Cathedral 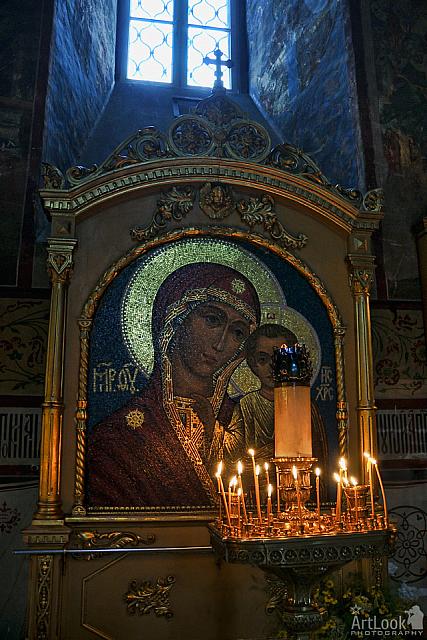 «Mosaic Icon of Our Lady of Kazan in Assumption Cathedral»

Our Lady of Kazan icon is surely the most important icon in Russia. Due to its legendary connection with famous miracles it was reproduced many times by various Russian artists. The beautiful mosaic icon of Our Lady of Kazan was made in late 19th century and placed in Dormition (Assumption) cathedral of Holy-Trinity St. Sergius Lavra (monastery).

Photo #125 taken on September 22, 2011 during countryside tour to Sergiev Posad with my Dear client from USA, Brooks Szolyga.

Overall view of Common Burial in Anosino in Summer with Flowers

Overview war memorial in the village Anosino in Istra district of Moscow region with a lot od flowers at the begining of summer season. The monument with statues of Soviet soldier and woman grieving over the common burial for their countrymen who were killed during battles for Moscow city in October-November 1941.