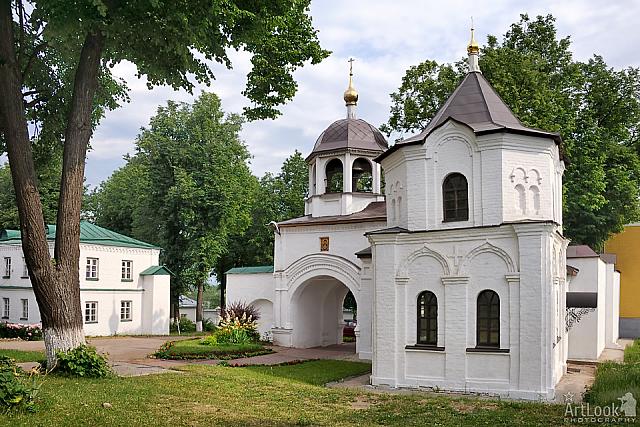 Summer view of the architectural ensemble of the Regent House and the belfry over the Holy Gates built on the grounds of the Convent of St. Theodore Stratilates (Fedorovsky monastery) in the 18th century.

This monastery has more well-preserved 17th- and 18th-century stone buildings, both old and new styles, than any other monastery in Pereslavl. Two 17th-century houses are built in the old Russian tent-roof style, with stone patterned casings on the windows. The 17th-century house of the Father Superior and the 18th-century Regent House are also of this style.

In the late 17th century and the first half of the 18th century, the monastery of St. Theodore was under the care of the royal family. Funds donated by Princess Natalia Alekseevna were used to build two churches, and Tsar Peter I made rich contributions as well. In 1722, by a decree of Peter the Great, the nuns of the monastery were taught "German spun yarn." Around the same time, Fedorovsky monastery was a place of imprisonment of many "undesirable" notable women, including Anna Feodorovna, wife of Attorney-General Paul Yaguzhinsky.

Photo #012 taken on June 08, 2014 during one day countryside tour to Pereslavl-Zalessky with my dear client from USA, Jan Squires.