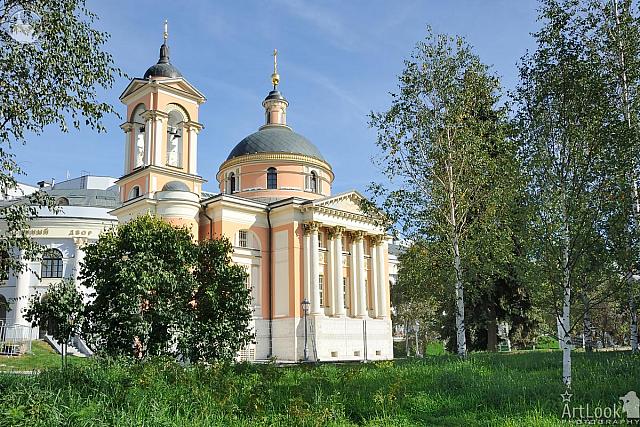 Early morning view from the new Zaryadye park of the restored St. Barbara's Church (Church of St. Varvara) at the beginning of Varvarka street framed with beautiful birch trees. About 138 birches with a height of 7-8 meters from the Primorsky Kray (Far Eastern Federal District of Russia) were planted on the grounds of the new Moscow innovative park in the historical center of Moscow city to feature different landscapes of Russian Federation.

The church dedicated to St. Barbara (Rus: Varvara) was built in the area of Kitay-Gorod between 1796 and 1801 by the Royal architect Rodion Kazakov in the classical style. It was constructed on the site of ancient church built in 1514 by Aloisio the New (Aleviz Fryazin) the Italian architect who was responsible for Archangel Michael's Cathedral in the Kremlin. In the 1920s the church was closed, although subsequently restored between 1967 and 1967. It was returned to the Orthodox Church in 1991.

The St. Varvara (Barbara) church located on 2 Varvarka street was restored again in 2016-2017 with other churches on the street during construction of the new innovative park Zaryadye in downtown of Moscow city, few minutes walk from the Red Square and St. Basil’s Cathedral.