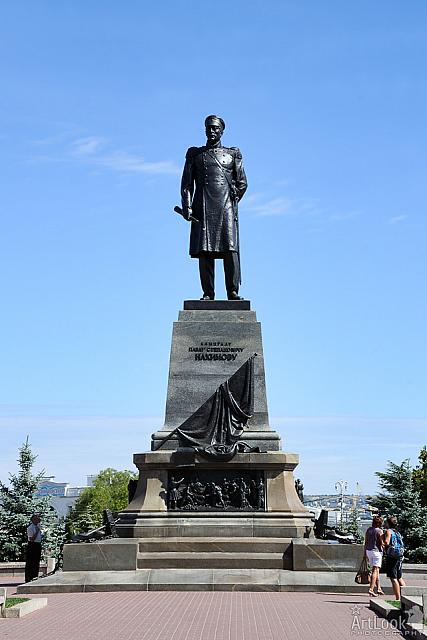 Outstanding naval commander, inspirational leader and patriot, Admiral Pavel Nakhimov (1802-1855) is one of Sevastopol's and Russian greatest heroes. The monument is located at the very heart of Sevastopol on square named after him. Best known as one of the Russian leaders of the Crimean war, Pavel Nakhimov had unanimous admiration of the sailors who were under his command. Modest in everyday life and brave in fighting, he was a model for them. Fatally wounded two months before the end of the siege, he was buried in the Burial Vault of the Admirals on the central hill of Sevastopol next to his fellow-fighters admirals Kornilov, Istomin and to their preceptor Mikhail Lasarev. During the Crimean War Nakhimov distinguished himself by annihilating the Ottoman (Turkish) fleet at Sinope in 1853. The monument created by skulptor Н. V., Tomskiy and architect A. V. Arefjev was solemnly opened on November 5, 1959.

The picture posted on March 17th, 2014 and dedicated to all people of Crimea, Russians, Ukrainians and Tatars, who voted a day before to join to Russian Federation. Welcome back!

My dear client from India, Rishi Ahuja, takes night photographs of the Cathedral of Christ the Savior sitting with tripod on Patriarchy Bridge.