Church of St. Nicholas of Myra in Alushta at Sunset 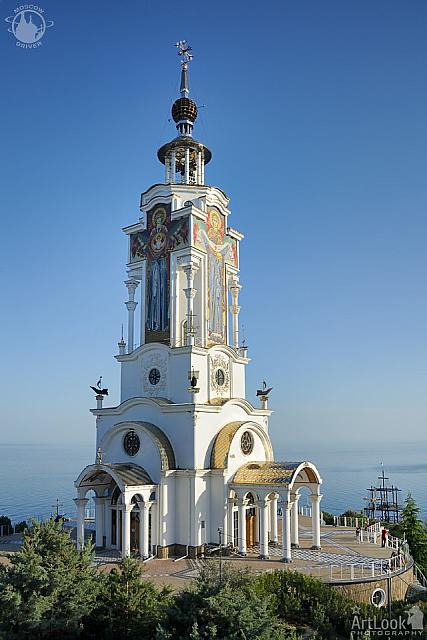 «Church of St. Nicholas of Myra in Alushta at Sunset»
Buy this Photo

Overview at sunset of the Church of St. Nicholas of Myra built in 2007 near Malorechenskoye village, Alushta, Republic of Crimea, that became a part of the Memorial Complex "In Memory of the Dead on the Waters" opened on May 7, 2009.

A patron and sponsor of the project became the Russian businessmen Alexander Lebedev, who took a decision and invested funds in constructing here the new Crimean Wonder in 2004.

The memorial and architectural complex is a tribute to the memory of sailors, fishermen, and travelers who became victims of accidents on water, as well as an eternal symbol of the unity of the earthly and heavenly life of each person.

In general, the entire complex looks like a ship, the base (deck) of which is a basement with round portholes-windows, decorative stained-glass windows, and the church seems floating on the sea. The motive of the ship was chosen not by chance. According to the Christian teaching, the Ship of the Faith delivers the souls of those who perished on the waves of earthly existence into the quiet pier of eternal life. All the symbolism of the architectural and decorative solution is associated with the marine theme, which is present both in the elements of interior and exterior decoration and in the design of the adjacent territory.

The height of the temple is 66 m. Its central symbols are the images of the Athonite Mother of God, St. Nicholas of Myra, miracle worker, Yaroslavl Oranta (Iconographic type of the Mother of God) - "The Sign", revered as a defender of theft and disasters, and the Mother of God of the Intercession, the miraculous image of which symbolizes the relentless Orthodox Slavic peoples Patronage of the Lady of the human race Images, inscribed in the form of a cross, are made and the technique of the Byzantine mosaic on all facades of the church.

The dome of the church is crowned by an equilateral Greek (heraldic) cross - the sign of the square, towering above the openwork golden gilded ball, symbolizing the earth. In the middle of this ball there is a lighthouse, which gives a guiding ray of hope for salvation to all travelers who have lost their way in the world's sea.

View from a corner of Resurrection Church on the elegant old Church of the Transfiguration topped with onion domes and Orthodox crosses on the grounds of the Suzdal’Museum of Wooden Architecture And Peasants' Life in a winter season. The three-level wooden church was built in the village of Kozlyatyevo in the Kolchugino District of Vladimir Region (Before revolution Gubernia) in 1756.