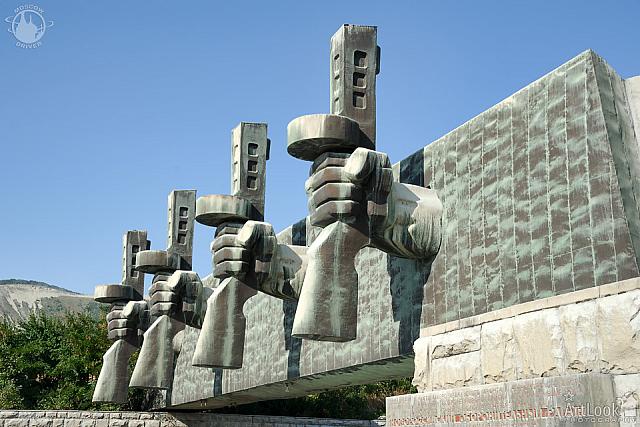 View of a fragment of the memorial complex "The Defensive Line" in Novorossiysk showing 40-meter-high Stella that like a barrier, thrown across the road and blocked the path to the enemy. It is the side from when the Nazi invaders attacked during the Great Patriotic War 1941-1945. As a clear symbol of perseverance, powerful hands of the defenders of the city are put forward, tightly squeezing PPSh submachine guns in the trunks of which flames burn and on the granite of the supports are carved the names of the parts and formations that participated in the battles.

In the summer of 1942, fierce battles with the German fascist invaders unfolded in the Kuban. Seeking to advance to the Terek and the passes of the main Caucasian ridge, the Nazis suffered heavy losses. The 17th German army was torn to the Black Sea coast. On the way, the black hordes of the enemy were breast-fed combat units of the Novorossiysk naval bases and the combined air group. The enemy was stopped on the ninth kilometer of the Novorossiysk highway. Having occupied a significant part of the city, the Nazis could not advance further along the Sukhum highway. At the walls of the cement plant "October" a line of defense passed through the fire line.

The creators of the monument: sculptor V. Tsigal and architects J. Belopolsky, sculptor H. Havin. It was unveiled on September 15, 1978, to commemorate the 35th anniversary of the defeat of Nazi troops in Novorossiysk.

Side view of the imposing tent-roofed Church of Ascension framed by trees from the snow-covered grounds of Kolomenskoye park during a heavy snowfall in Moscow. The church was built in the royal estate Kolomenskoye in 1532 by the Grand Prince of Moscow Vasiliy III (Basil III) to celebrate the birth of his son Ivan, the future first Russian tsar Ivan IV the Terrible.