Photo Gallery War Memorials
Novorossiysk was awarded Hero City status in 1973. The Defence Line memorial was officially opened on September 15, 1978, and it is one of three major monuments commemorating the Great Patriotic War. The symbolism of the memorial is not difficult to see, 40-meter-high stele like a barrier, thrown across the road and blocked the path of the enemy.

In the summer of 1942, fierce battles with the German fascist invaders unfolded in the Kuban. Seeking to advance to the Terek and the passes of the main Caucasian ridge, the Nazis suffered heavy losses. The 17th German army was torn to the Black Sea coast. On the way, the black hordes of the enemy were breast-fed combat units of the Novorossiysk naval bases and the combined air group. The enemy was stopped here, on the ninth kilometer of the Novorossiysk highway. Having occupied a significant part of the city, the Nazis could not advance further along the Sukhum highway. At the walls of the cement plant "October" a line of defense passed through the fire line.

In honor of this event, a massive forty-meter beam-stele, lined with copper, was installed on powerful granite supports. It symbolizes a milestone.

On the chisel relief of copper, the line of defense, the five-pointed star of the Hero and the Order, which the city was awarded, are depicted. Here on the granite pillars are generalized images of soldiers who did not let the Hitlerites go further.

On the other hand (from when the Nazi invaders attacked during the Patriotic War), a horizontal bar is perceived by a massive barrier blocked by the enemy. As a clear symbol of perseverance, powerful hands of the defenders of the city are put forward, tightly squeezing PPSh submachine guns in the trunks of which flames burn and on the granite of the supports are carved the names of the parts and formations that participated in the battles. The composition of the memorial organically included riddled with a thousand splinters of outfits an iron skeleton of a freight car - a silent witness of fierce battles. The creators of the monument: sculptor V. Tsigal and architects J. Belopolsky, sculptor H. Havin. 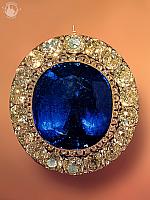