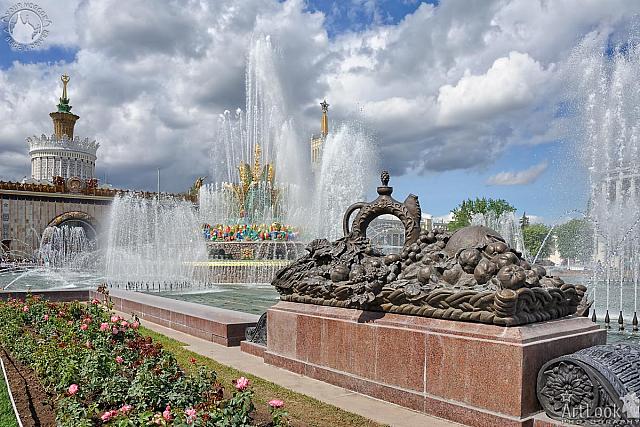 The beautiful bronze still life composition and frothy water jets of Stone Flower Fountain on a summer day at VDNKh. It is one of 16 compositions with the gifts of nature from republics of the Soviet Union on the granite pedestal of the fountain after. Created in 1954 by the architect Konstantin Topuridze, this is the largest fountain of VDNKh park and exhibition consisting of almost 1000 water jets. Large-scale restoration of the fountain was carried out in 2018-2019 for the first time in 65 years and is timed to coincide with the 80th anniversary of the foundation of VDNKh.

The pavilion «Agriculture» (Ukrainian SSR) built also in 1954 is visible on the background of the composition. It is one of the most beautiful in the ensemble of the All-Russian Exhibition Center.

Photo #070 taken on July 07, 2019 during visiting VDNKh Park with my Dear clients from Australia, John and Mira Garland.

Tsaritsyno museum and reserve in Moscow was founded in 1984 in the park of the same name. The estate is known from the late 16th century, when it belonged to Tsarina Irina, sister of Tsar Boris Godunov. At that time it was called Bogorodskoye. In the 17th century it belonged to the Streshnevs and then to the Galitzines.