Sculptures of Latvian and Lithuanian Republics 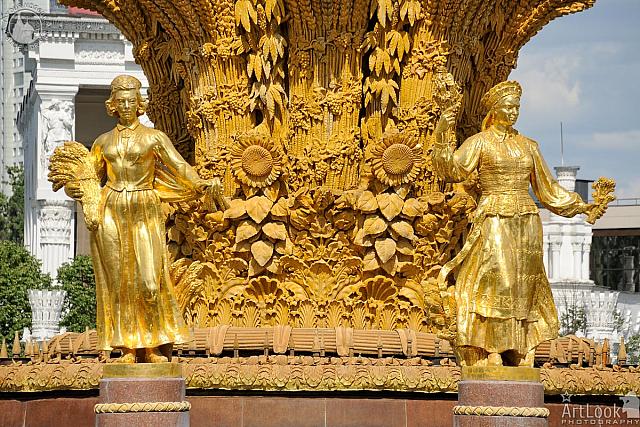 «Sculptures of Latvian and Lithuanian Republics»

Two of sixteen gilded beauties of the extravagant Friendship of Nations Fountain at VDNKh park and exhibition in the background of an enormous bowl-shaped bundle of wheat, sunflowers, and hemp. The sculptures of the well-known fountain and Moscow landmark represent Latvian (at the left) and Lithuanian Soviet Socialist Republics of USSR.

The sculpture of the beautiful woman representing the Latvian SSR (at the left) was created by sculptor Zinaida Bazhenova. In addition to the national costume and a bundle of ears in their hands, which are designed to glorify the agriculture of the region, the author masterfully depicted a brooch decorating the gate. This traditional Latvian decoration is called sakta.

Another beautiful gilded sculpture at the right represents Lithuanian SSR. The ribbon in the hair and the draperies of the Lithuanian girl's costume also shine in the sun. In one hand she holds flax and barley, and in the other - flowers and oak leaves. Flax, barley, flowers, and oak - all this can be found on the coat of arms of the Lithuanian SSR. These plants glorified the republic, and the girl captured her triumph forever.

Sixteen gilded statues of women are standing around this composition, symbolizing the republics of the Soviet Union before 1956. The “Friendship of Nations” fountain was created on the grounds of VDNKh in 1954. It was meant to become one of the main symbols of the exhibition. However, it became the symbol that reflects the celebration and high spirits associated with the victory in WWII, embodying the national dream of prosperity in the whole world.

Bust to Yury Dolgoruky – the Founder of Pereslavl

The monument to prince Yury Dolgoruky (1090-1157), son of Vladimir Monomakh (the Grand Prince of Kiev), is placed close to the entance gate of Goritsky monastery, near a big local pond. Pereslavl-Zalessky was founded by this famous Russian prince from Rurik dynasty (Rurikids) in 1157, on the last year of his life.