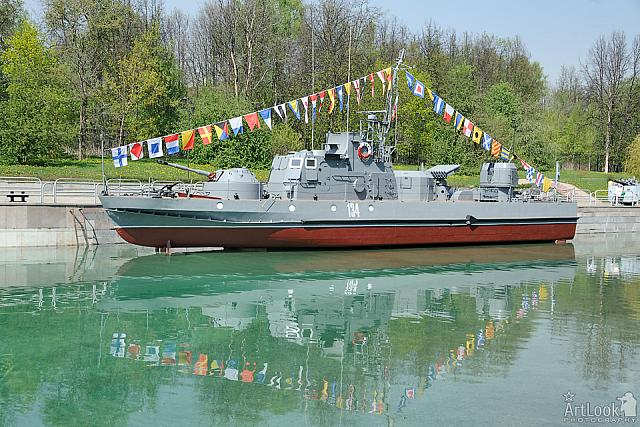 The first river artillery boats (armored boats) were developed in 1935 for actions on rivers, lakes and sea shallows. The tank gun turrets, the armored car machine-gun turrets and rocket weapon (the “Katyushas») were mounted on them. During the Great Patriotic War 1941-1945 the armored boats were com¬missioned to the river and lake flotillas.

In the late 1950's — early 1960's. the Soviet Union had ceased designing new artillery armored vehicles. But in 1965, the Navy together with Minsudproma approved the design task river gunboats (ACA) of the project in 1204 (code "Shmel" (Eng: Bumblebee)). With all of this all are in service with the BCA in 1965 were also reclassified AKA, almost becoming the founders of the "new" subclass combat boats. It was designed for patrol duties on rivers and lakes, vessels and boats combat sweep, artillery shooting assistance for ground forces; troops with armament carrying during crossing and acting in river basins; largely unsuitable for open seas operations, but can be used for protecting harbors and acting littoral and shallow-water seas areas.

Head boat Project 1204 (Shmel class — as litsezreem, Western designation coincided with a real cipher) was built in Kerch at the shipbuilding factory "Zaliv" (Eng: The Bay) in 1967. It was built 118 artillery armored gunboats by the project 1204 from 1967 until 1974 in total.

Photo #211 taken on May 01, 2014 during tour of open-air Weaponry and Fortification Exposition in Victory Park on Poklonnaya Hill with my dear client from Spain, Carmelo Gonzalez Santana

Walls and Towers of Savior Monastery in Heavy Snowfall

View from covered snow monastic garden on the fortification wall and tent-roofed tower (17th century) of the Savior Monastery of St. Euthymius in heavy snowfall. The tops of a bell tower and onion silver domes of Semionovskaya church (18th century) appear behind the wall, outside the monastery.