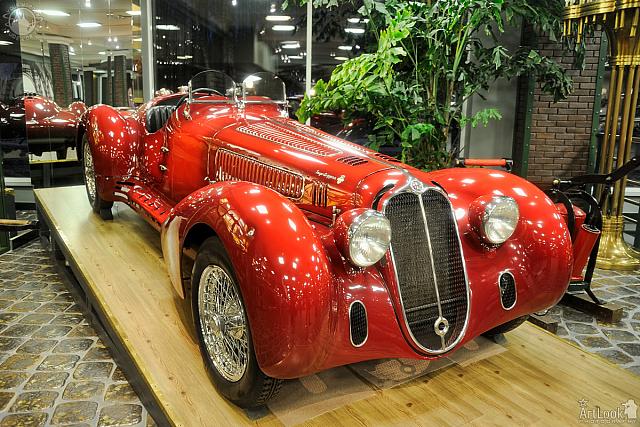 Front angle view of a nice shinning Alfa-Romeo 8C2900B, a very successful race car from the 1930’s, on display at Vadim Zadorozhny Technics Museum in Archangelskoye, the western suburb of Moscow.

The model 8C2900B was known as the successor of her prosperous predecessors the 8C2600B and 8C2900A which won numerous victories on the Grand Prix racings, Le Mans and Mille Miglia. Alfa Romeo 8C2900B was the last creation of the engineer Vittorio Jano because he soon quitted the company. He managed to find a balance between mass, speed, and elegance in this car.

- The exhibit was restored in the workshop of the museum

- The vintage vehicle is working

Photo #274 taken on December 23, 2017, during countryside tour to Archangelskoye and Zvenigorod with my dear clients from India, Arvind Sony.

From beginning 2009, the flights operated by Aeroflot and the company’s partners are being transferred to new Terminal D of Sheremetyevo International airport located next to Terminal F (former Sheremetyevo-2) and another new Terminal E.