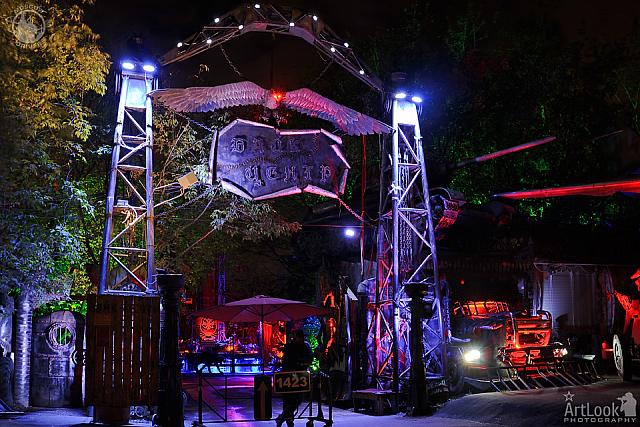 View from Nizhnie Mnevniki street on the entrance into the International Moscow Bike Center and Club "Sexton" at night. Its design was taken from the popular movie "From Dusk Till Dawn" and made by members of the Club.

It is the center of the one of the biggest and famous group of bikers in Russia called "Night Wolfs" that was opened for Russian and foreign motorcyclists. Its aim is to unite different sides of biker's life: musical, motorcycle and ideological. Alexander Zaldostanov is the leader of the Russian bikers, his nickname is Hirurg (Surgeon).

MGU Against Grey Clouds at Twilight. May 2014

The illuminated building of Moscow State University contrasts nicely against clouds by the time it gets dark. Its reflection in the local pond works always perfect for great night pictures in summer season. The main building of Moscow State University is one of famous seven high-rises built in middle of 20th century by order of Stalin, that is why they were called "Stalin high-rises" and "Seven Sisters".