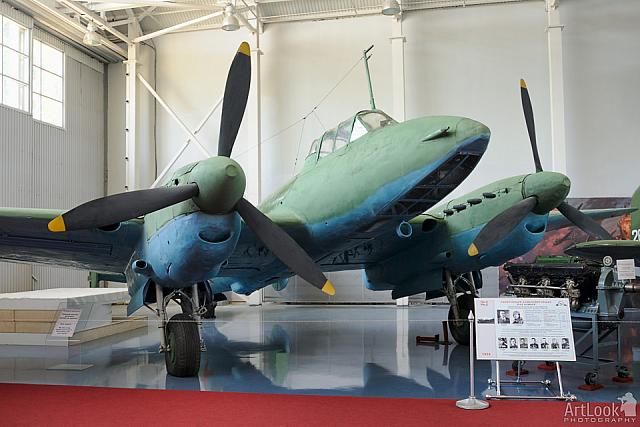 The Pe-2 appeared to be the only serial dive bomber of the Great Patriotic War 1941-1945 and was regarded as one of the best ground attack aircraft of the war. It was extremely successful in the roles of heavy fighter, reconnaissance and night fighter. The Pe-2 was fast, maneuverable and durable and became known by the NATO reporting name “Buck”. The total number of the Pe-2 produced aircraft of different modification is more than 11420.

Under difficult circumstances, in prison, Petlyakov continued to work, and in 1938 he was assigned the task of designing a high-altitude high-speed twin-engined fighter-interceptor with a pressurized cabin. And such an aircraft (index 100) was made. The first flight on Pe-2 was performed by test-pilot P. Stefanovsky on May 7, 1939. It was nicknamed Peshka ("Pawn"; also a Russian diminutive for "little Pe"). The new aircraft tests were in full swing, but suddenly a government directive was received: in short time the Design Office had to convert the fighter into a dive bomber.

The Pe-2 dive bomber exhibited in the Central Air Force museum in Monino has been assembled from the remains of three planes. It was delivered to the museum on July 14, 1959.  This aircraft with other “Flying Legends” from the Great Patriotic War were moved from open-area exhibit to the new historical exhibit of the museum in new hall-hangar #6 during celebrations of 65th anniversary of the Great Victory in 2010.

Photo #025 taken on May 31, 2013 during countryside tour to the Central Air Force Museum in Monino with my Dear Client from USA, Gene Ragan. ©2013 www.Moscow-Driver.com by Arthur Lookyanov

The high obelisk was erected in Alexander Garden in front of the grotto on July 10, 1914, a year after the tercentenary of the Romanov dynasty was celebrated. The monument in honor of the celebration 300th anniversary of the Romanov house was designed by project of architect S.