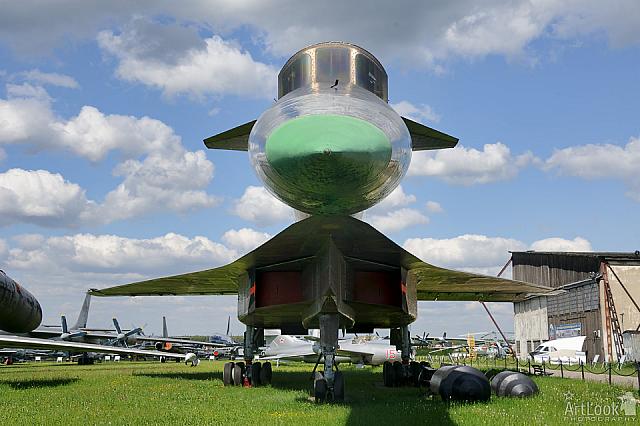 The prototype of Soviet Supersonic Bomber Sukhoi T-4 (Su-100) “Sotka” on the grounds of the museum of Air Force in Monino.

The project of the advanced strike / reconnaissance aircraft with unique titanium and steel structure was headed by Deputy Designer General N.S. Chernyakov with the design submitted by the Sukhoi design bureau in 1960s. The main task of developing the new aircraft for destruction of attack aircraft carriers, search-and-destroy missions on small-size, mobile and fixed offshore and onshore targets, with a flight range of 7,000 km (4350 mi). It is the first aircraft in the world to fly quadruplex redundant 3-axes fly-by-wire system. The T-4 (Su-100, “Sotka”) gained a competitive edge with its high cruise speed of 3,200 km/h (2000 mph), which, according to expert estimates, promised to render it much less vulnerable to air defence threats. More information about the aircraft here: Prototype Bomber Sukhoi T-4 (Su-100) “Sotka” (1960s).

Photo #172 taken on June 06, 2013 during countryside tour to the Central Air Force Museum in Monino with my Dear Client from Brazil, Marcelo Ramos.