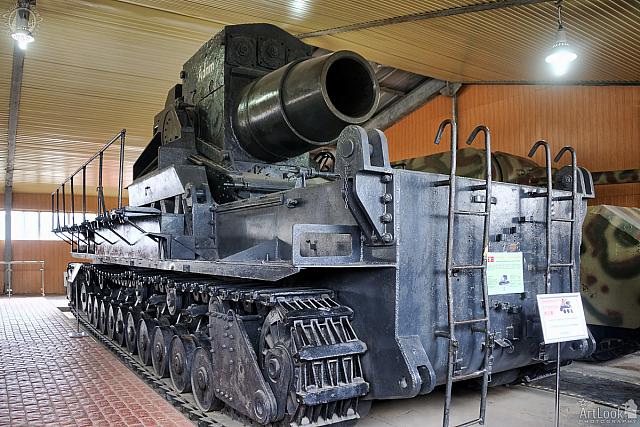 World War II German self-propelled siege mortar Gerat 041 "Karl" is the unique and one-of-a-kind military vehicle on display in Pavilion #6 "Auto-armor and special equipment of the Third Reich" of Kubinka tank museum. The mortar "Karl-Ger?t" (040/041) (German literally "Karl-device"), also known as M?rser Karl, was developed by Rheinmetall in 1937 for destroying the most powerful defensive structures. From November 1940 to August 1941, a prototype and 6 units were manufactured, named: Fenrir, Adam, Eva, Thor, Odin, Loki, Ziu. They were used in the storming of the Soviet fortresses of Brest, Lvov, Sevastopol, while suppressing the uprising in Warsaw in August 1944. Only one Karl-Ger?t has survived that displayed in the museum and the remainder were scrapped after the war.

Photo #270 taken on April 20, 2018 during countryside war tour to Technics Museum in Archangelskoye, and Kubinka Tank Museum and Park Patriot with my dear clients from Brazil, Marcelo and Marcelo Otavio Ramos

In the Park of Sculptures in the Rain

Couple of lovers sitting on a bench n Muzeon Park of Arts u under an umbrella in the rain. In front of them sculptures and symbols from former Soviet times on display in the park.