Impressive Sculpture of the Soldier of Victory 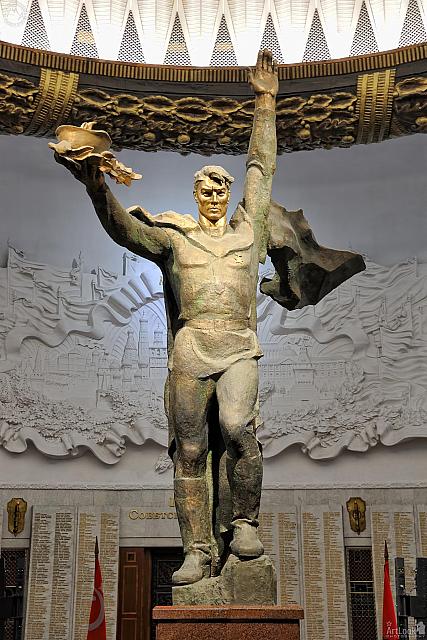 «Impressive Sculpture of the Soldier of Victory»

Highlighted bronze sculpture “The Soldier of Victory” on the granite pedestal in the center of the Glory hall in the Central Museum of the Great Patriotic War 1941-1945 on Poklonnaya Hill. The 10-meter sculpture of Soldier-Victor was created in 1995 by the design of the talented Soviet-Ukrainian sculptor Valentin Ivanovich Znoba. He created the impressive image of the Soviet soldier who stopped the terrible war, the soldier with a beautiful and calm face. The soldier holds on his outstretched arm, not a submachine gun, but a helmet in the form of a lamp burning, that is the memorial fire for all those who died. Waving ragged raincoat tent, torso and outstretched arm create in the composition the outline of a cross.

Photo #055 taken on December 27, 2019 during tour of the Great Patriotic War Museum in Victory Park with my Dear client from Australia, Tyson Hedland.

Beautiful Bright Pink and White Tulips on the Grounds of Lavra