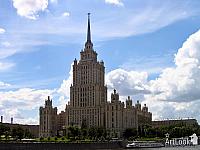 The Hotel Ukraina is one of 7 Moscow skyscrapers (Seven Sisters) which were built by Stalin's order at the middle of 20th century. It was erected in Moscow at 1949-1955 by the design of the architects Mordvinov and Krasilnikov. It stands on the bank of the Moscow-River, and is situated in the very heart of the administrative and trade centre of Moscow (opposite The White House).